Home > Back to Search Results > First magazine printing of the Constitution of the United States...
Click image to enlarge 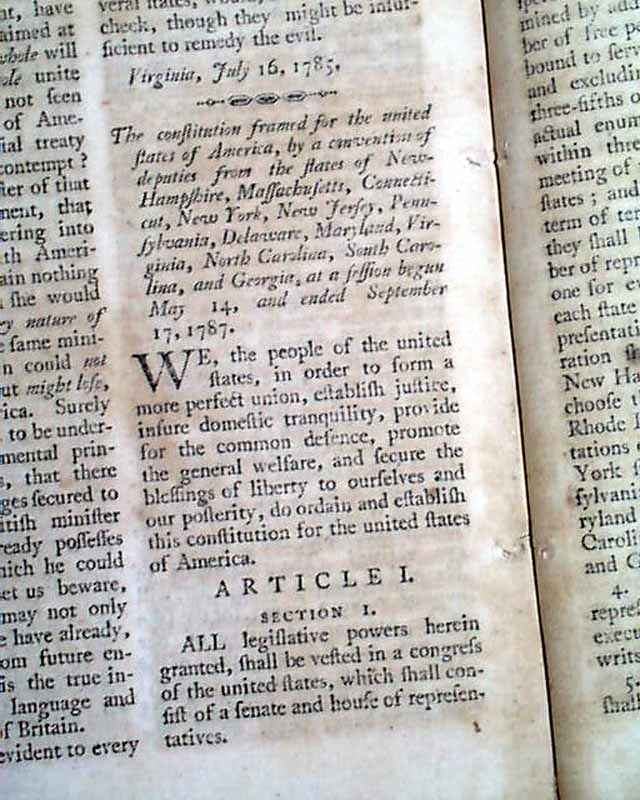 This title, along with the "Columbian Magazine", has the honor of being the first successful American magazine, both published in Philadelphia. The Museum was published by Mathew Carey and existed from January, 1787 thru the end of 1792. He was very proud of his subscription list which contained the names of the most famous men in the country, and printed commendatory letters of Washington, Dickinson, Livingston, Randolph and many others. Washington wrote in part: "I believe the American Museum has meet with extensive, I may say, with universal approbation from competent judges...eminently calculated to disseminate political, agricultural...& other valuable information...conducted with taste, attention, and propriety...".
This September issue has the very distinguished honor of being the first magazine to print the Constitution of the United States, and great to have in a publication from the city where the document was created. Although the Columbian Magazine also published the Constitution in its September issue, evidence gathered from newspaper advertisements of the time suggest the American Museum's issue preceded the Columbian's by two days.
The Constitution appears in the back third of the issue, complete with a prefacing paragraph which includes: "The constitution framed for the united states of America by a convention of deputies from the states of.....at a session begun May 14, and ended September 17, 1787." followed by the memorable Preamble which begins: "We, the people of the united states, in order to form a more perfect union..." and more (see). This is followed by "Article I" and the balance of the Constitution, taking 8 pages. At its conclusion is the signatures in type of George Washington and other members of the Constitutional Convention, listed by state (see). This is then followed by two letters, each signed in type by the Convention President, George Washington, concerning the work of the Convention and the notice that it will be sent to the various states for ratification, etc. (see). The first letter begins: "We have now the honour to submit to the consideration of the united states in congress assembled, that constitution which has appeared to us the most advisable...".
Related items in this issue include a resolution from Congress to allow state conventions to be formed to consider the Constitution, and a document from the Pennsylvania Assembly for their meeting to review the Constitution in hopes of ratification. And there are Letters numbered I, II, and III headed "On the Federal Government", signed by "An American Citizen", Phila., Sept. 29, 1787.
At the beginning of the issues is: "Information for those who would wish to remove to America, By his excellency Benjamin Franklin, president of the commonwealth of Pennsylvania" which takes nearly 6 pages, dated from France, 1784. There are also several other political issues of interest.
This issue is complete in 104 pages, disbound, measures 4 5/8 by 7 3/4 inches, still has the original full title page (typically missing), plus the table of contents at the back of the issue. One unrelated leaf has several old tape mends which have stained but cause no loss of readability, otherwise light, scattered foxing, and in very nice condition.
A very significant issue: the first magazine printing of the Constitution from the city where the document was created.