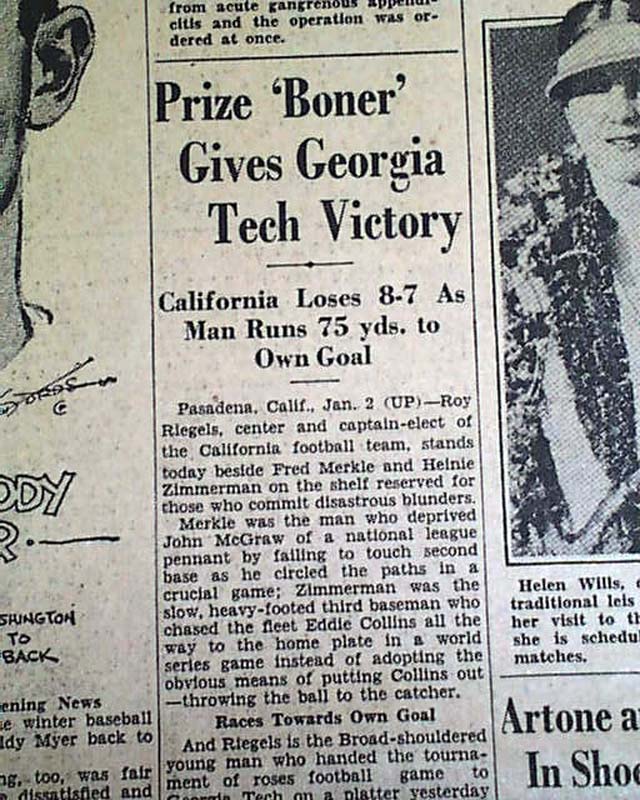 The sport's section (page 6) has a one column heading: "Prize 'Boner' Gives Georgia Tech Victory" with subhead. (see)
Fourteen pages, loose with some damage along the spine with unrelated text loss, a little other margin wear.

wikipedia notes: On January 1, 1929, the Golden Bears faced the Georgia Tech Yellow Jackets at the Rose Bowl in Pasadena, California, USA. Midway through the second quarter, Riegels, who played center, picked up a fumble by Tech's Jack "Stumpy" Thomason. Just 30 yards away from the Yellow Jackets' end zone, Riegels was somehow turned around and ran 65 yards in the wrong direction.

Teammate and quarterback Benny Lom chased Riegels, screaming at him to stop. Known for his speed, Lom finally caught up with Riegels at California's 3-yard line and tried to turn him around, but he was immediately hit by a wave of Tech players and tackled back to the 1-yard line. The Bears chose to punt rather than risk a play so close to their own end zone, but Tech's Vance Maree blocked Lom's punt and Georgia Tech scored a safety, giving them a 2-0 lead.

Riegels was so distraught that he had to be talked into returning to the game for the second half. Lom passed for a touchdown and kicked the extra point, and Riegels blocked a Tech punt in the second half, but Tech would win the game—and their second national championship—by a final score of 8-7.