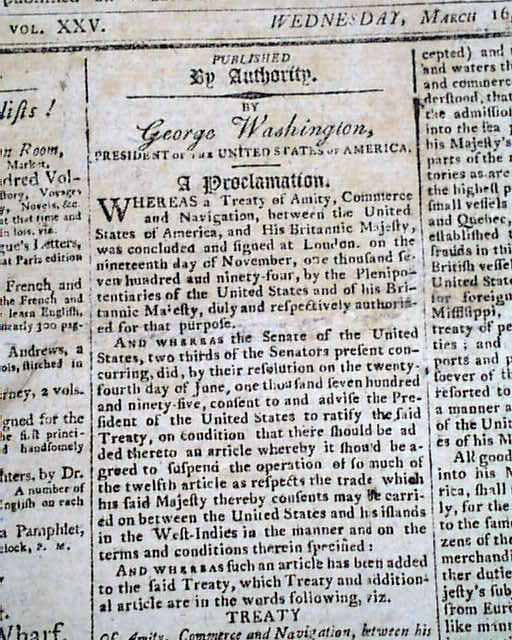 A very significant pair of issues as they contain, in its entirety, the full text of the Jay Treaty, one of the more significant 18th century documents in American history.
Taking much of the front page and part of page 2 in the issue of the 16th is part of Jay's Treaty through Article 12. Prefacing the Treaty is a "Proclamation" providing particulars about the conclusion and ratification of the Treaty. Includes word that the treaty was ratified upon the condition that much of the 12th article be suspended and be replaced with an additional article.
Text of the treaty concludes in the issue of the 19th taking all of the front page and a bit of pg. 2 where it is signed in type by Grenville and John Jay. Page 2 also has the "Additional Article" relative to the aforementioned condition. Signed in script type: Go. Washington.
Each issue is complete in 4 pages, a bit of very light damp staining to the two right corners. The March 16 issue has a small bit of a lower corner on the back leaf missing (see photo) which effects only ads.