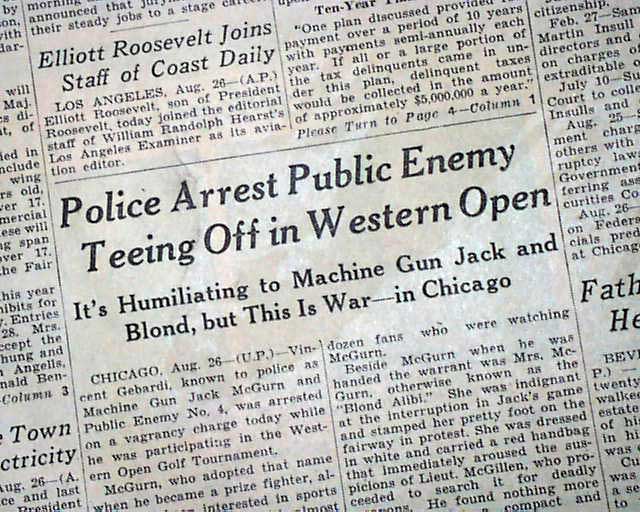 Near the bottom of the front page is a two column heading: "Police Arrest Public Enemy Teeing Off in Western Open" with subhead. (see) McGurn was the main hit man for Al Capone during the gangster heyday of the 1920's.
Complete 1st section only with all 14 pages, light toning and minor wear at the margins, small library stamp within masthead, generally in good condition.

wikipedia notes: On August 25, 1933, the Western Open golf championship began at Olympia Fields Country Club in the far south suburb of Olympia Fields. A reasonably skilled golfer and flashy dresser, McGurn entered the competition as Vincent Gebhardi (another version of his real name), the professional at public Evergreen Golf Course. In the opening round, McGurn carded a 13-over-par 83 on course No. 4 (today's North Course). The next morning, the name "Gebhardi" on the day's pairing sheet was observed by an alert Chicago Police chief detective, who sent two sergeants to arrest him. "Aware of McGurn's truculent temper", the Chicago Tribune account reported, "the sergeants enlisted the help of Lt. Frank McGillen and five policemen from the Homewood station of the county highway force".

McGurn was playing much better the second day. The group of burly officers accosted McGurn on the seventh green and told him he was under arrest under a warrant issued the day before under the "criminal reputation law". He was accompanied by his wife, the glitzy "Blonde Alibi" Louise Rolfe. Wearing a tight, thin white dress and sporting a three-carat diamond ring, she approached the policemen and snapped, "Whose brilliant idea was this?" McGurn politely asked to finish his round. Amused, the plainclothesmen agreed and became part of his gallery. But the police presence began to unnerve McGurn and his game suddenly went sour. He came in with a 16-over-par 86 for a 36-hole total of 169, 14 strokes above making the cut.