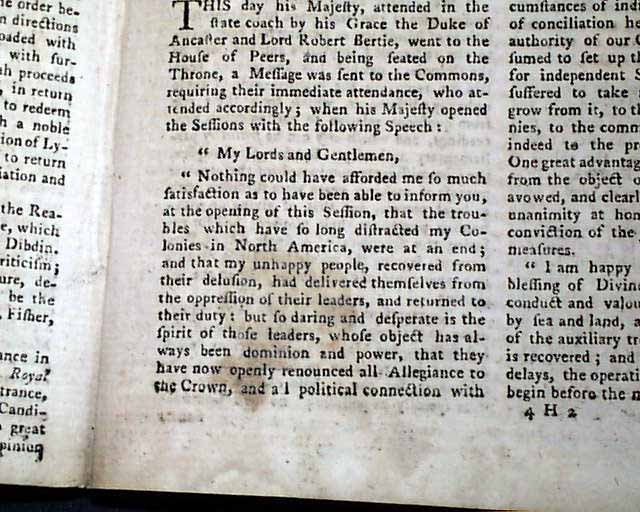 Certainly a very uncommon title from the 18th century, formatted much like the more common 'Gentleman's Magazine" or the era.
A speech in Parliament mentions the hope that Americans would return to their allegiance to the King, but: "...that they have now openly renounced all allegiance to the Crown and all political connection with this Country: They have rejected...the means of conciliation..." and more.
Further debates in Parliament are noted here as well.
Then a: "Declaration" by Viscount Richard Howe and General William Howe announcing that the king might be disposed to change various laws considered restrictive should the patriots consider returning to their British allegiance.
There are five terrific pages of: "Advices From America" with a lengthy & detailed report from General William Howe on his success in the capture of the city. His report is datelined "Head Quarters York Island, Sept. 21, 1776" and begins: "I have the satisfaction to inform your lordship of his majesty's troops being in possession of the city of New York. Upon the rebels abandoning their lines at Brooklyn..." followed by much more on the details of the capture, and signed in type: W. Howe.
This is followed by another letter signed by: W. Howe from New York, dated 2 days later on Sept. 23, which begins: "Between the 20th and 21st instant at midnight a most horrid attempt was made by a number of wretches to burn the town of New  York in which they succeeded too well, having set it on fire in several places..." with more.
This, then, is followed by yet another note signed by W. Howe concerning his successful & unopposed possession of Paulus Hook, followed then by the "Return of ordinances & stores taken in the city of New York...after the retreat of the Rebels, Sept. 15, 1776". There is then a letter from Vice Admiral Lord Viscount Howe from the ship Eagle in the New York River, Sept. 18 concerning the taking of New York City.
Reporting then turns to events in the North with a letter signed in type: Guy Carleton from Crown Point beginning: "The rebel fleet upon Lake Champlain has been entirely defeated in two actions..." with the details. Then a letter from Capt. Douglass from Quebec with more concerning Lake Champlain, with a list of the ships from England and from the "Rebel Fleet" on the lake.
More fine content as well, too much to note here, but portions can be seen in the photos.
There are no plates present.
Complete in 70 pages, full title/contents page, 5 by 8 inches, nice condition.