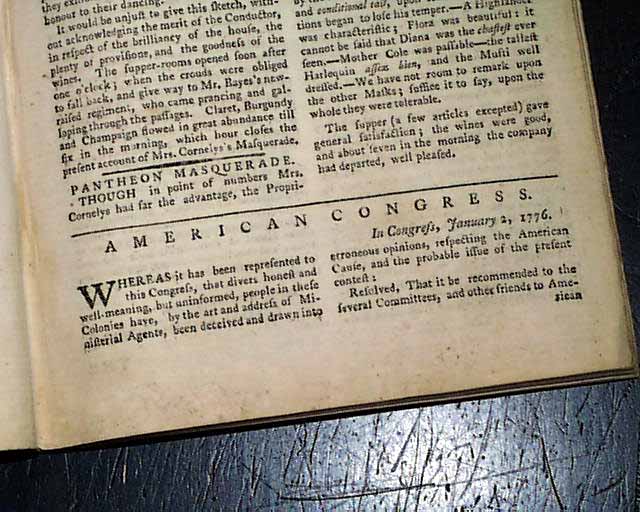 Certainly a very uncommon title from the 18th century, formatted much like the more common 'Gentleman's Magazine" or the era.
A terrific issue as it contains a full printing of the historic Tory Act which did not appear in most other periodicals of the day. It describes how colonies should handle those Americans who remain loyal to the British and King George.
The act called on colonial committees to indoctrinate those: “...honest and well-meaning, but uninformed people...” by enlightening them as to the “...origin, nature and extent of the present controversy...”. The Congress remained “...fully persuaded that the more our right to the enjoyment of our ancient liberties and privileges is examined, the more just and necessary our present opposition to ministerial tyranny will appear...”.
The document takes over a full page with much more notable content, signed in type by the Secretary of Congress: Charles Thomson.
There is also a great "Letter from Gen. Lee to Gen. Burgoyne" which takes 1 1/2 pages, with parts reading: "...the whole British Empire stands tottering on the brink of ruin & you have it in your power to prevent the fatal catastrophe...You ask me if it is independence at which the Americans aim? I Answer, No! the idea never entered a single American head until a most intolerable oppression forced it upon them..." plus too much more to list here, signed: C. Lee.
Over a full page is taken up with proceedings from Parliament concerning: "Strictures on the Address Against the Americans".
Half of the back page is taken up with news reports from: "America" including news from Charleston, plus a report from Williamsburg, as well as a letter from Montreal.
No plates called for are present.
Complete in 56 pages, 5 by 8 inches, full title/contents page, some damp staining to some of the back leaves, generally good condition.