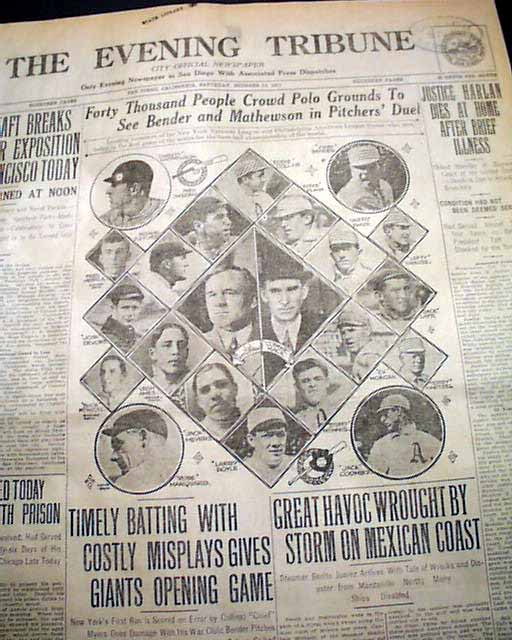 A nice set reporting all five games of the Series with front page accounts (and some inside as well) of each game.
The Oct. 14 issue has a terrific graphic headed: "40,000 People Crowd Polo Grounds To See Bender & Mathewson in Pitchers' Duel" with player photos for both teams.
The issue of the 26th reports the final game results: "ATHLETICS MAKE BURLESQUE OUT OF GAME WITH NEW YORK GIANTS AND RETAIN THE CHAMPIONSHIP" and: "FINAL SCORE 13 TO 2; BENDER IN FINE FORM".
Page 2 also features a terrific graphic showing photos of the heads of all Athletics within a "1911" banner. This is headed: "PHILADELPHIA ATHLETICS WIN CHAMPIONSHIP FOR SECOND TIME; MAKE FARCE OF THE FINAL GAME".
This was the Series in which Franklin "Home Run" Baker got his nick-name, with the issue of the 24th featuring a large pg. 2 photo of his head.
All six issues are complete & in nice condition with minor binding indents at the blank spine.