Home > Back to Search Results > 1,350 go down with the Titanic...
Click image to enlarge 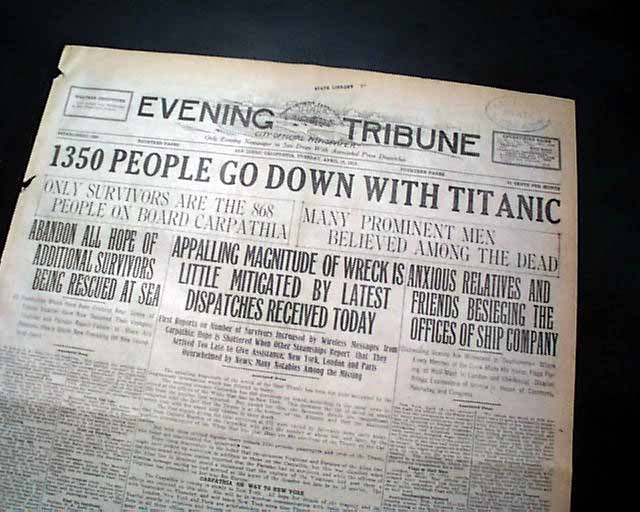 
THE EVENING TRIBUNE, San Diego, California, April 16, 1912  This is the first report with the truth of the Titanic tragedy, the sobering banner headline: "1350 PEOPLE GO DOWN WITH TITANIC" and among the subheads: "Only Survivors Are the 868 People On Board Carpathia" "Many Prominent Men Believed Among The Dead" "Anxious Relatives And Friends Besieging The Offices Of Ship Company" "Appalling Magnitude Of Wreck Is Little Mitigated by Latest Dispatches Received Today" and much more.
Curiously, the previous day's issue noted all passengers were safe.
Good coverage carries over to page 2 as well, which includes a lengthy: "List Of Survivors" and more.
Complete in 14 pages, library stamp in the masthead, minor binding slits at the blank spine, in uncommonly nice, clean condition.