Home > Back to Search Results > Earliest report on McKinley's death we have offered...
Click image to enlarge 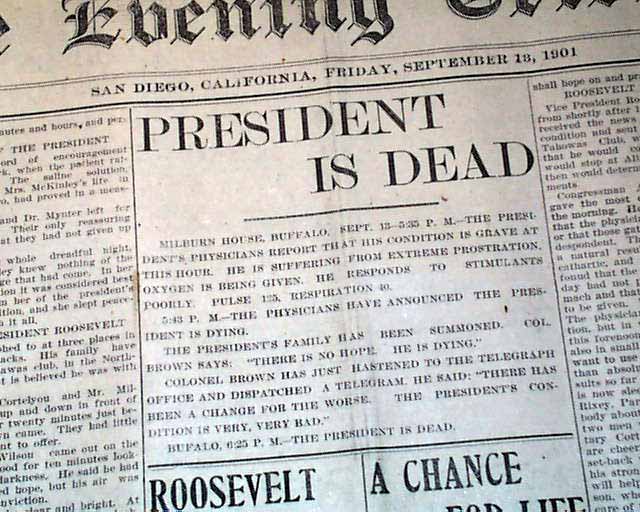 Earliest report on McKinley's death we have offered...

This is the earliest report on the death of President McKinley we have offered in our 44 years, as he died in Buffalo, New York at 6:25 p..m., however California had a three hour time-change advantage allowing this newspaper to offer this say-day report on his death. The earliest report we have offered previously was dated September 14.
Note the two column headline: "PRESIDENT IS DEAD" follow by several timed reports as the news was received, the last being: "Buffalo, 6:25 P.M. - The President Is Dead".
The timeliness of the report is emphasized by the first column heads which were already set: "McKINLEY'S CONDITION" "A Sudden Change for the Worse Causes Much Alarm--Physicians" "Puzzled at Weakness of the Heart Action--Crisis Prolonged". And another report notes: "A CHANCE OF LIFE" "The Crisis Will Not be Passed Until Tonight--The President" "In Danger of a Sudden Sinking Spell and Complete Collapse". The lengthy reporting under these heads were rendered moot when the news arrived of McKinley's death.
Eight pages, library stamp in the masthead, in uncommonly nice condition.