Home > Back to Search Results > The non-importation issue, and much more...
Click image to enlarge 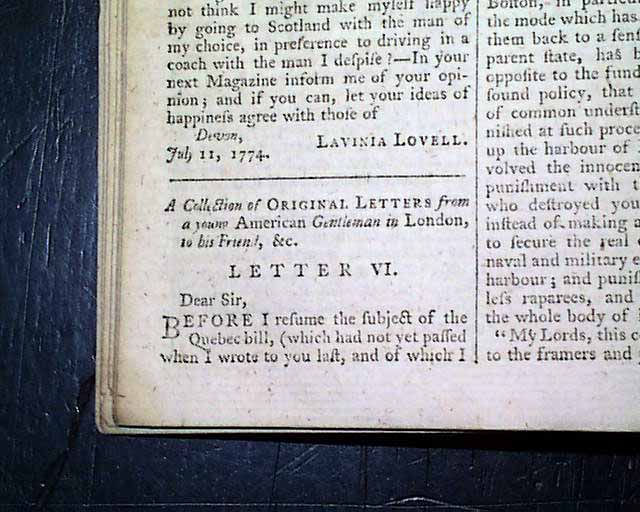 The non-importation issue, and much more...


THE TOWN & COUNTRY MAGAZINE, London, July, 1774  Formatted much like the 'Gentleman's Magazine" but a much less common title.
Eight pages are taken up with; Debates In the Political Club Room" which includes talk of the Quebec Bill and the tensions concerning Canada.
Near the back is much reporting on the tensions with the American colonies, too much to report  in full here but photos show most. A few bits include: "...that the exportation to Virginia is in a great measure stropped..." and: "Notwithstanding all the reports of a non-importation association being entered into by the several provinces...17 ships have been cleared at the custom house..." and: "...brings advice that at Norfolk there had been a meeting of the principal inhabitants in consequence of a letter...from Boston proposing a general association for not importing goods from Great Britain till the Boston port act be repealed...was agreed unanimously...". Also a report that  the people of Philadelphia were in sympathetic support of the Bostonians.
There is a lengthy letter from the merchants of Boston to the newly-arrived governor of Massachusetts, Thomas Gage, in which they congratulate him on his new appointment, but also caution him concerning the troubles they have with England including the oppressive actions of Parliament against the colonies.. It is followed by his response.
A bit more about non-importation as well.
Over two pages are taken up with: "A Collection of Original Letters form a Young American Gentleman in London to His Friend". Also 3 1/2 pages are taken up with the continued report of: "Captain Cook's Voyage" around the world.
Plates called for are lacking.
A very historic issue on at least two accounts.
Complete in 56 pages, full title/contents page, 5 by 8 inches, very nice condition.