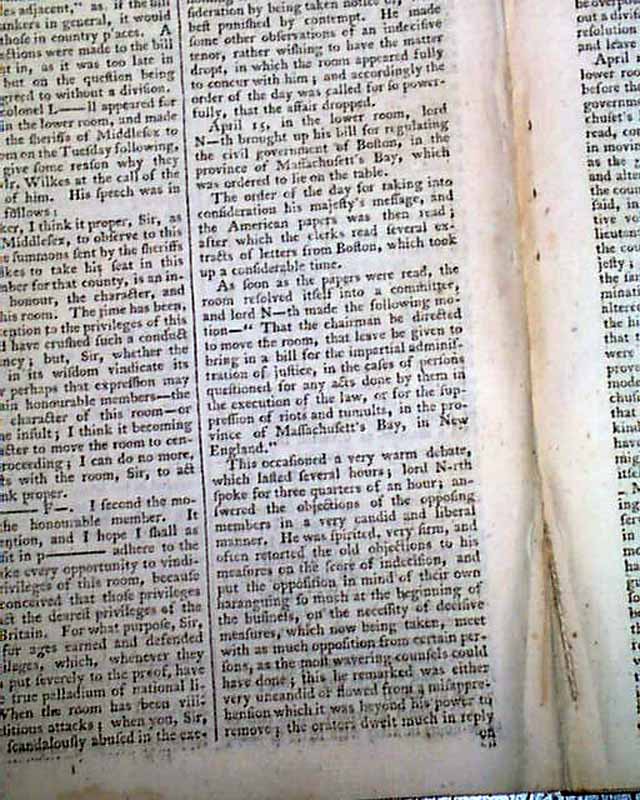 Formatted much like the 'Gentleman's Magazine" but a much less common title.
The most notable report is the historic reporting of the "2nd Boston Tea Party" which mentions: "...a number of persons entered the brig Fortune, Capt. Gorham, who arrived from London on the preceding day, and stove 28 and a half chests of tea, and discharged the contents into the harbour, being the whole of that article which came in said vessel; no damage was done to any other goods..." with a bit more.
A fine report of this very historic event which received less attention through history than the "first" Boston Tea Party of December 16, 1773.
"Debates In the Political Club" includes some discussion on the tensions in the American colonies, a few bits noting: "...Lord N__th brought up his bill for regulating the civil government of Boston, in the province of Massachusetts's Bay, which was ordered to lie on the table..." and further on: "...The Americans have laboured with an unwearied industry & flourished for near fourscore years under that democratic charter..."and much more.
There is over a page on: "Captain Cook's Voyage" around the world, including some reporting of "An Excursion into the Island of Otaheite [Tahiti]".
Under the book review section is discussion of: "The Right of the British Legislature to Tax the American Colonies Vindicated, and the Means of Offering the Right Proposed".
Under: "America" are datelines from New  York and Boston, the former having a report that: "Our tea ship is hourly expected...The sons of liberty will meet on Thursday night in every week at the house of Mr. Jasper Drake, till the arrival & departure of the tea ship."
Plates called for are lacking.
Complete in 56 pages, full title/contents page, 5 by 8 inches, very nice condition.