Home > Back to Search Results > On the troubles in Boston...
Click image to enlarge 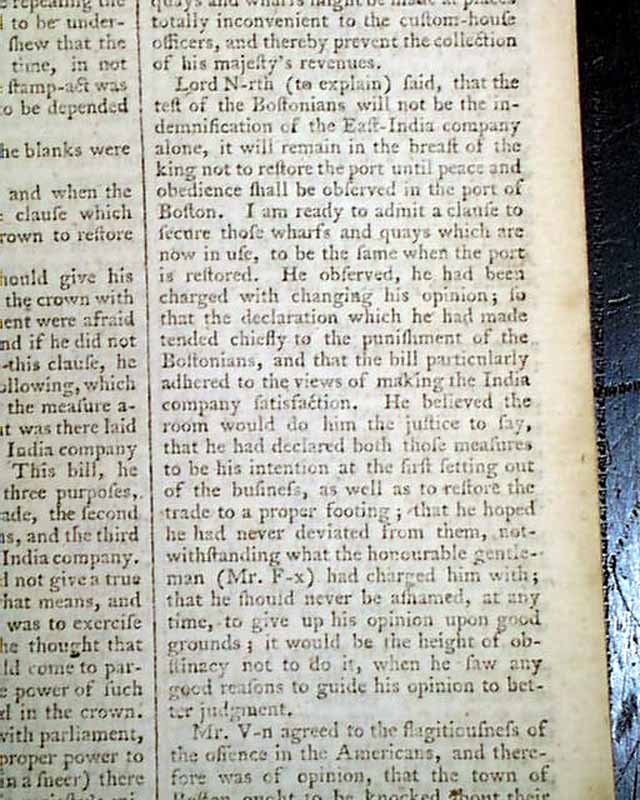 On the troubles in Boston...

* Prelude to the Revolutionary War

Formatted much like the 'Gentleman's Magazine" but a much less common title.
In "Debates in the Political Club' is mention that: "Lord North said, that the test of the Bostonians will not be the indemnification of the East-India company alone, it will remain in the breast of the king not to restore the port until peace & obedience shall be observed in the port of Boston...".
There are several pages on: "Captain Cook's Voyage" around the world.
Near the back are several notable American reports, a few bits including: "A great quantity of tents & camp equipment are ordered to be embarked for North America. The report continues to gain credit that the friends to the Bostonians have made some overtures which may probably prevent matters being carried to extremities...general agreed that general Gage will be sent to America to see all things settled upon a permanent & proper footing.".
There are further reports concerning the tensions in Boston, and the role of General Gage in securing Boston. There are also reports from New York, Savannah, and Charleston, which can be seen in the photos.
Plates called for are lacking.
Complete in 56 pages, full title/contents page, 5 by 8 inches, some light foxing, very nice condition.