Home > Back to Search Results > The latest news from America on the Revolutionary War...
Click image to enlarge 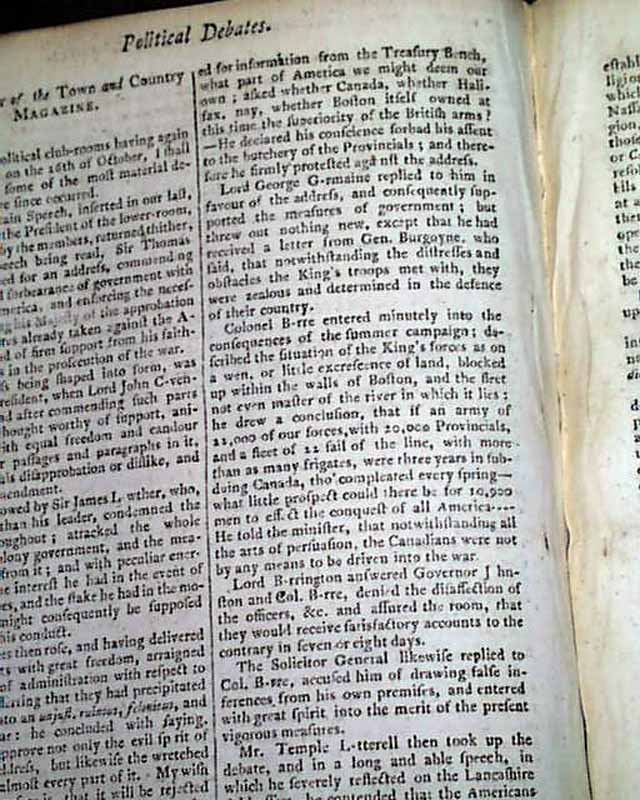 The latest news from America on the Revolutionary War...

Formatted very much like 'Gentleman's Magazine' but a much less common title.
There are various "Political Debates" on the military situation in America and what it might take to be victorious, portions shown in the photos. Included are "Debates on the Land Tax ill as it relates to funding for the war in America.
Near the back are additional reports concerning the Revolutionary War in America including comments of General Gage, General Carleton & others. Items include: "...arrived with 2 tons of tea...which the Liberty Boys immediately caused to be committed to the watery element to make tea for the fish..." and more. Also a document signed by: Tho. Gage, plus other war news as seen in the photos.
Over three pages are taken up with the: ""Continuation of an Epitome of Dr. Hawkesworth's Collection of Voyages Containing Captain Cook's Voyage round the World in 1768, 1769, 1770 & 1771".
Both full page plates called for are present.
Complete in 56 pages, 5 by 8 inches, full title/contents page, a bit of light foxing in the bottom portion, generally nice condition.

Criticizing Burgoyne for his failure ...