Home > Back to Search Results > Growing tensions between England and America...
Click image to enlarge 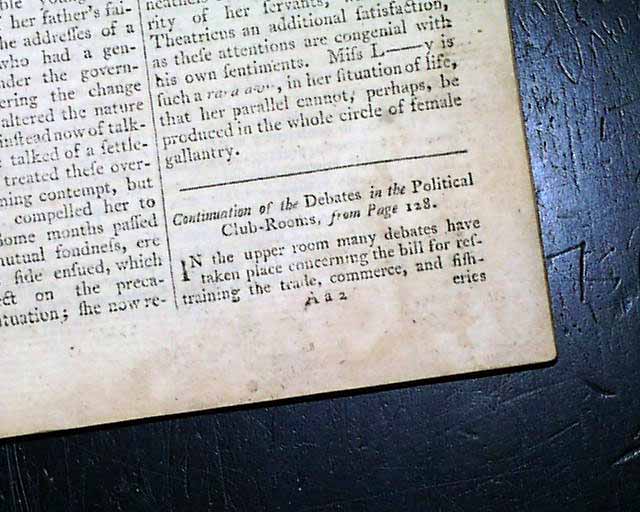 Growing tensions between England and America...


THE TOWN & COUNTRY MAGAZINE, London, April, 1775  Formatted very much like the more popular "Gentleman's Magazine" but a considerably less common title.
A wealth of content on the various issues between America and England which ultimately would soon lead to the Revolutionary War. Included are several pages on the: "Political Debates on the American Bill" for restraining trade. Also a great & notable document being the: "Humble Address, Remonstrance, and Petition of the Lord Mayor, Aldermen & Livery of the City of London" to the King, imploring him to remove the sanctions against the American colonies to prevent economic hardships on both sides of the Atlantic. This is followed by the King's response.
Over a full page is taken up with news headed: "America" with Boston & New York datelines, one report being a resolution from the provincial congress concerning those who are assisting the British troops who: "...may enable them to annoy, or in any manner distress said inhabitants, he or they so offending shall be held in the highest detestation & deemed inveterate enemies to America...". Other reports are focused on the  growing tensions between America and England.
There are also over 4 pages taken up with further report on: "Captain Cook's Voyage Round the World".
Present are 2 of the 3 full page plates called for.
Complete in 56 pages, 5 by 8 inches, full title/contents page, very nice condition.