Home > Back to Search Results > The work of Butch Cassidy and his "Hole-In-The-Wall" gang...
Click image to enlarge 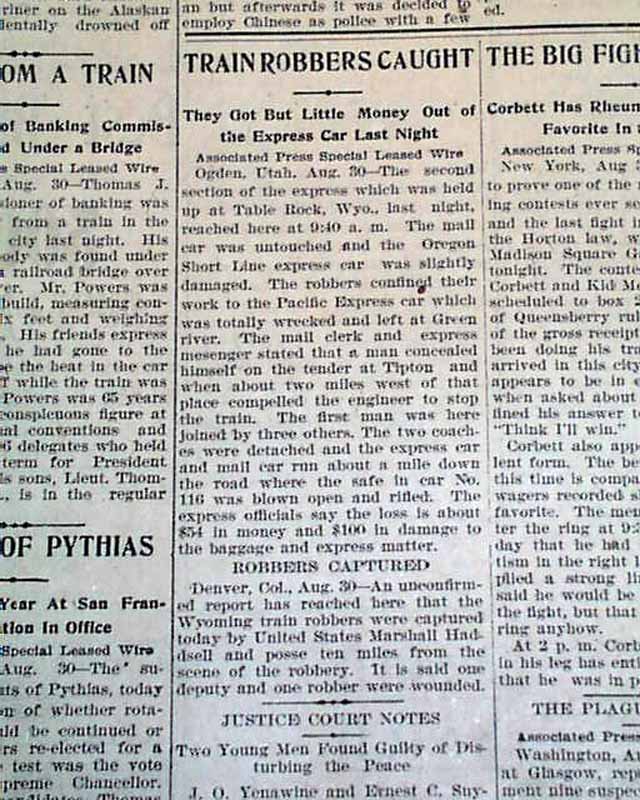 The work of Butch Cassidy and his "Hole-In-The-Wall" gang...

The front page has an article: "TRAIN ROBBERS CAUGHT" "They Got but Little Money Out of the Express Car Last Night".
Included are some details of the robbery, now ascribed to the work of Butch Cassidy and the "Hole In The Wall Gang", a few bits including: "The second section of the express which was held up at Table Rock, Wyo., last night reached here...The mail car was untouched...The robbers confined their work to the Pacific Express car which was totally wrecked...that a man concealed himself on the tender at Tipton...compelled the engineer to stop the train...joined by thee others. The two coaches were detached and the express card...where the safe in car No. 116 was blown open and rifled..." with more.
Several website credit Butch Cassidy and his gang with this robbery, even though the robbers were never caught (despite the article stating they were).
Finding period newspapers which can have reports on the Hole In the Wall Gang is very difficult.
Eight pages, two library stamps at the top, small binding holes at the blank spine, in surprisingly nice condition.