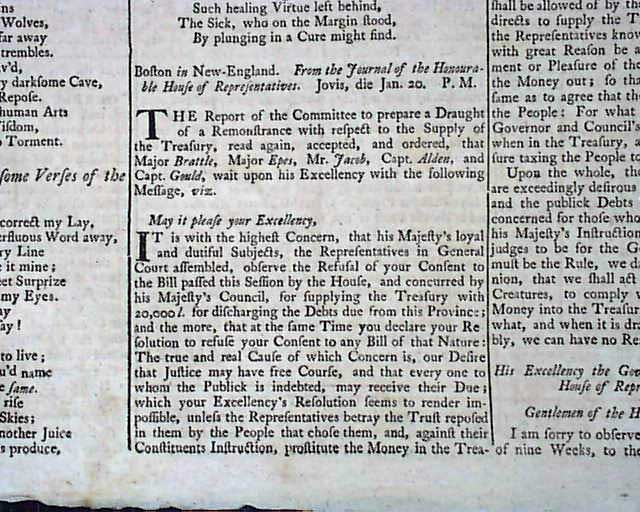 
THE WEEKLY REGISTER, London, April 15, 1732  A quite rare title as this is the first we have encountered in our 44 years. It appears to have run from 1730-1735. Later in 1732 the title would add: "...or, Universal Journal".
Rarely do we find such early-dated newspaper from England which give much space to American reports, but this is one. Over one-third of the front page has: "Boston in New-England...House of Representatives" which is: "The Report of the Committee  to prepare a Draught of a Remonstrance with respect to the Supply of the Treasury, read again, accepted, and ordered, that Major Brattle, Major Epes, Mr. Jacob, Capt. Alden, and Capt. Gould, wait upon his Excellency with the following Message".
And what follows is that lengthy message. The bottom of the front page has: "His Excellency the Governor's Answer to the Message of the House of Representatives" which carries over to take two-thirds of page 2 where it is signed in type: J. Belcher.
Four pages, red tax stamp on the front page, 10 1/4 by 13 1/2 inches, nice condition.