Home > Back to Search Results > Rare list of the first families to settle in Georgia...
Click image to enlarge 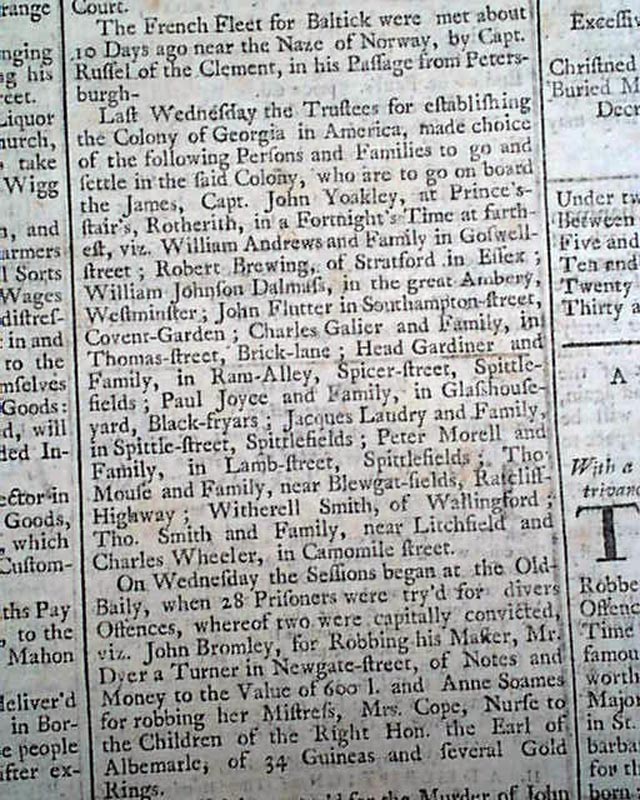 Rare list of the first families to settle in Georgia...

A quite rare title which existed from 1720-1737 with most of the news reports on pages 2 and 3.
The news is almost entirely of British interest, however one terrific report notes the first families to settle in the new colony of Georgia. It begins: "Last Wednesday the Trustees for establishing the Colony of Georgia in America, made choice of the following persons and families to go and settle in the said Colony, who are to go on board the James, Capt. John Yoakley...in a fortnight's time..." and what follows is the list of he first families to sail for Georgia. An extremely significant genealogical report.
A book on the founding of Savannah verifies this report, including in part: "...The ship James, Captain Yoakley, with several colonists on board, sailed up the Savannah and unloaded at the town a short time after the treaty. Captain Yoakley was given the prize which the Trustees had offered to the "first ship that should sail up the Savannah river and unload at the town...".
Four pages, 9 1/4 by 14 inches, loss to a lower corner affects just one word on pages 1 and 2, very nice condition.