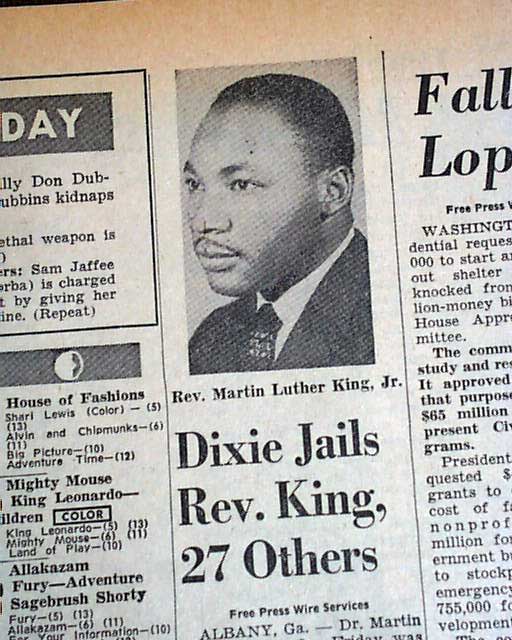 The top of page 5 has a one column photo of Martin Luther King Jr. with heading: "Dixie Jails Rev. King, 27 Others" (see)
Other news, sports and advertisements of the day. Complete in 22 pages, two small library stamps within the masthead, a few small binding holes along the spine/1st column, generally in very nice condition.

wikipedia notes: The Albany Movement was a desegregation coalition formed in Albany, Georgia in November, 1961. In December King and the SCLC became involved. The movement mobilized thousands of citizens for a broad-front nonviolent attack on every aspect of segregation within the city and attracted nationwide attention. When King first visited on December 15, 1961, he "had planned to stay a day or so and return home after giving counsel." But the following day he was swept up in a mass arrest of peaceful demonstrators, and he declined bail until the city made concessions. "Those agreements", said King, "were dishonored and violated by the city," as soon as he left town. King returned in July 1962, and was sentenced to forty-five days in jail or a $178 fine. He chose jail. Three days into his sentence, Chief Pritchett discreetly arranged for King's fine to be paid and ordered his release. "We had witnessed persons being kicked off lunch counter stools ... ejected from churches ... and thrown into jail ... But for the first time, we witnessed being kicked out of jail."