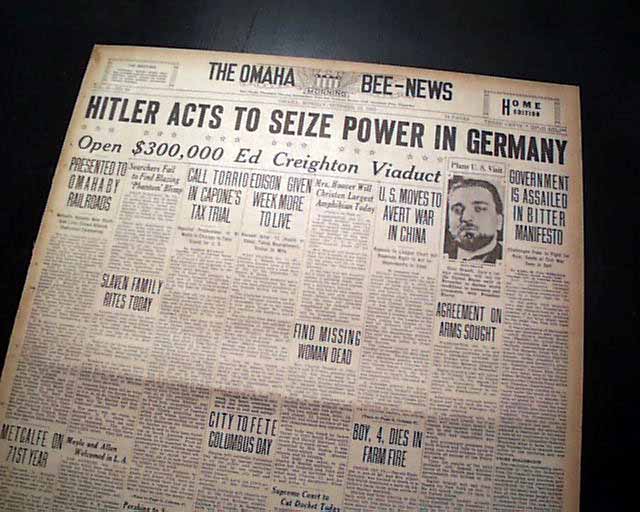 
THE OMAHA BEE-NEWS, Nebraska, Oct. 12, 1931  A great banner headline on a very early report on the ascendancy of Hitler and his Nazi party: "HITLER ACTS TO SEIZE POWER IN GERMANY" with subheads: "Government Is Assailed In Bitter Manifesto" "Challenges Foes to Fight for Rule; Seeds of Civil War Seen..."
Part of the text has a subhead: "Hitler Has Revenge" & begins: "Hitler, only recently ridiculed & despised, had his revenge & triumph Sunday. Among the many nationally famous figures here, he was the cynosure of all eyes & among the rival clans he was the unquestioned master. As if he already felt the reins of power in his hands..." with much more.
This was before Hitler came to national power as Chancellor of Germany in January, 1933.
Fourteen pages, nice condition.