Home > Back to Search Results > Explorers of the world...
Click image to enlarge 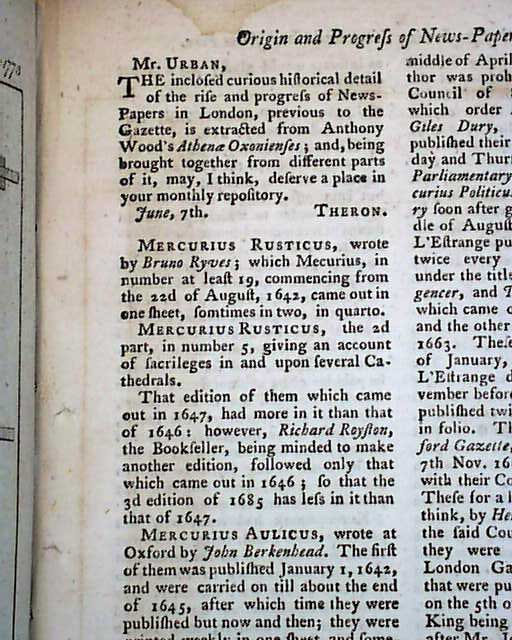 Explorers of the world...

Among the articles in this issue are: "Origin & Progress of Newspapers" which discussion some of the newsbooks & other newspapers of the mid-17th century; "Some Account of the Chinese Temple" which is accompanied by a full page print titled: "The House of Confucius in Kew Gardens".
Also: "An Account of Voyages...for Making Discoveries in the Southern Hemisphere & successively performed by Commodore Byron, Capt. Willis, Capt. Carteret, and Capt. Cook in the Dolphin, the Swallow, and the Endeavour..." which has much fine content taking over 4 pages.
Near the back is the "Historical Chronicle" which has the latest news reports of the day, and includes some text concerning America.
Another nice feature of this issue is that it contains 4 full page plates, although only 3 are called for. In addition to the "House of Confucius" are a "Plan of Solway Moss" (not called for, but the related article is in this issue hence the print), "Curiosities found in Herculaneum", and another plate with 3 various items.
Complete in 48 pages, 5 by 8 1/2 inches, full title/contents page featuring an engraving of St. John's Gate, some stains or foxing with mild margin wear.