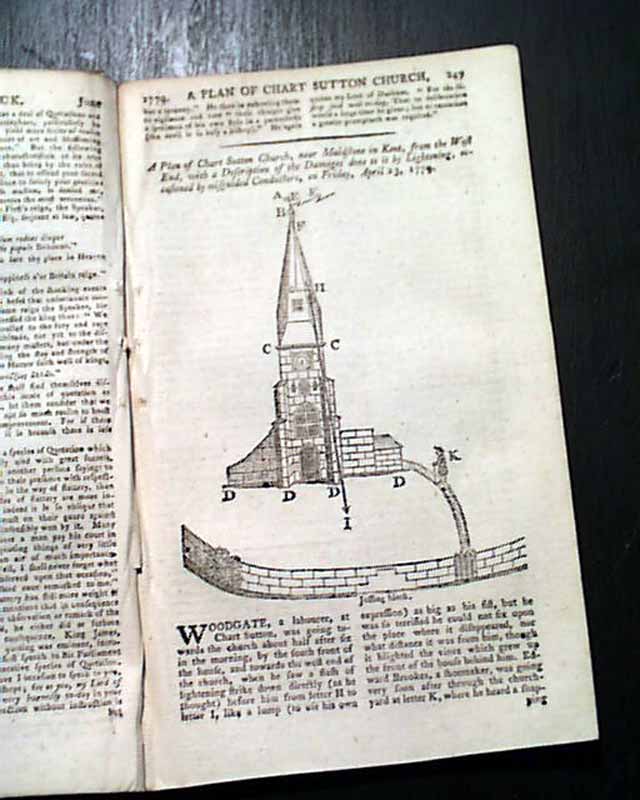 
THE LONDON MAGAZINE, England, June, 1779  Near the back are over 3 pages of reports headed: "American Affairs" which includes a letter from General Clinton to George Germain dated at New York which relates to a letter from General Mathew to General Henry Clinton dated at Portsmouth, Virginia & accompanied by a letter from Sir George Collier to Clinton, both of which relate some details on the burning of Norfolk and Portsmouth. Yet another letter on this event as well.
In this historic British expedition, commanded by Adm. Sir John Collier, the raid at the Hampton Roads vicinity caused devastating effect by capturing or destroying large quantities of American ships and supplies.
There are several pages of reporting from Parliament which includes a few mentions of America.
Inside also has an illustration of: "...Sutton Church, near Maidstone in Kent...with a Description of  the Damages Done to  It by Lightening...". Also: "On Cards, And Card-Playing".
Both plates called for are present, one being a terrific & very detailed foldout map of: "Argyllshire" in Scotland, measuring 8 1/4 by 10 1/2 inches, and the other being a nice print of: "Inverary Castle", a bit close-trimmed at the top affecting the border of the print.
Complete in 48 pages, 5 by 8 1/4 inches, very nice, clean condition.