Home > Back to Search Results > Funeral of Abraham Lincoln...
Click image to enlarge 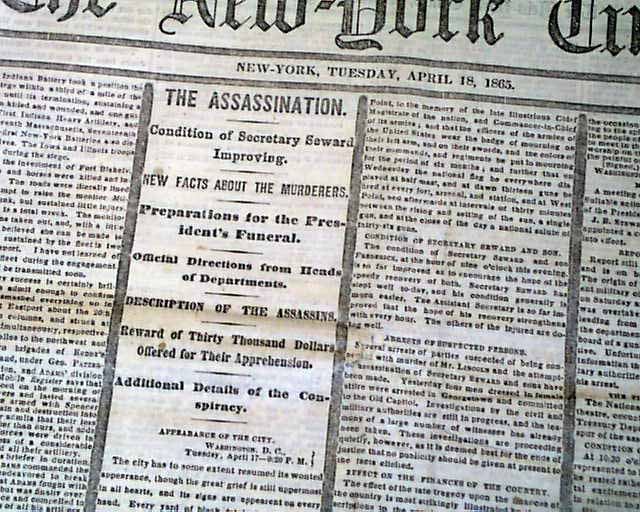 Much good content in this issue, which has all columns on all 8 pages black-bordered due to the death of Lincoln.
The front page has one column heads including: "THE ASSASSINATION" "Condition of Secretary Seward Improving" "New Facts About the Murderers" "Preparations for the President's Funeral" "Description of the Assassins" "Reward of Thirty Thousand Dollars Offered for Their Apprehension" "Additional Details of the Conspiracy" and more, with some great text from just 3 days after Lincoln's death.
Also: "Capture of Mobile" "The Last of the Coast Cities in Our Possession" "The City Surrendered on the 9th inst. to Our Forces"  with more, including: "Important From Gen. Sherman" "Probable  Surrender of the Rebel Army". One of the Inside pages has: "The Assassination of Mr. Lincoln" "Interesting Particulars of the Tragedy". One of the earlier issues on the funeral.
Eight pages, never bound nor trimmed and in very nice condition. In the original state just as sold on the streets in 1865.