Home > Back to Search Results > The Gettysburg Address on the front page...
Click image to enlarge 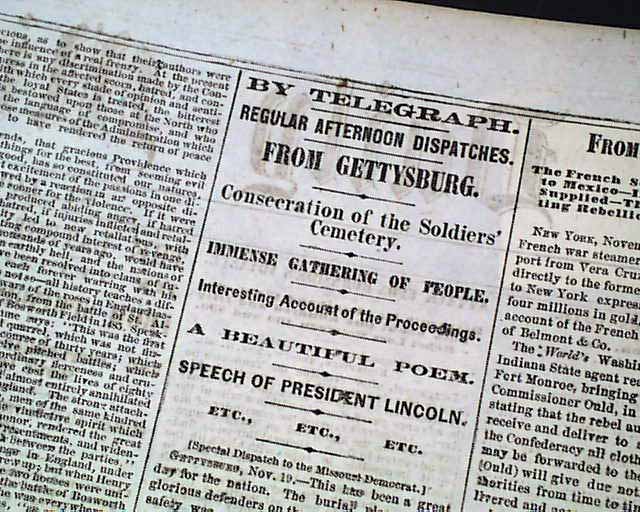 The Gettysburg Address on the front page...


DAILY MISSOURI DEMOCRAT, St. Louis, Nov. 23, 1863  It would be difficult to argue for a more notable speech from the 19th century than the Gettysburg Address by President Abraham Lincoln. The top of page 2 has column heads: "FROM GETTYSBURG" "Consecration of the Soldiers' Cemetery" "Immense Gathering of People" 'Interesting Account of the Proceedings" "A Beautiful Poem" "Speech Of President Lincoln". Nice that Lincolns' address is mentioned in the headlines as rarely was this done in other newspaper.
Lincoln's speech was not the focus of the day as Edward Everett was the primary speaker and the full text of his speech appears here as well under other column heads: "Address Delivered At Gettysburg" "Consecration of the Cemetery" "Nineteenth of November" "Interment of the Remains" with more, and with Everett's speech taking over 5 columns.
But it would be the President's 2 minute, 272 word address that would go down in history as perhaps the most memorable speech of any President. His address is preceded with: "The Marshal introduced President Lincoln, who spoke as follows, after the immense applause:..." and what follows is the full text of his famous speech, followed by: "The conclusion of the President's remarks was followed by immense applause and three cheers given him, as also three cheers for the Governors of the states..." with more coverage on the ceremonies at Gettysburg.
Four pages, very large folio size, 23 by 30 inches, very nice, clean condition. Folder size noted is for the issue folded in half.