Home > Back to Search Results > Franklin and Adams in France... Much more...
Click image to enlarge 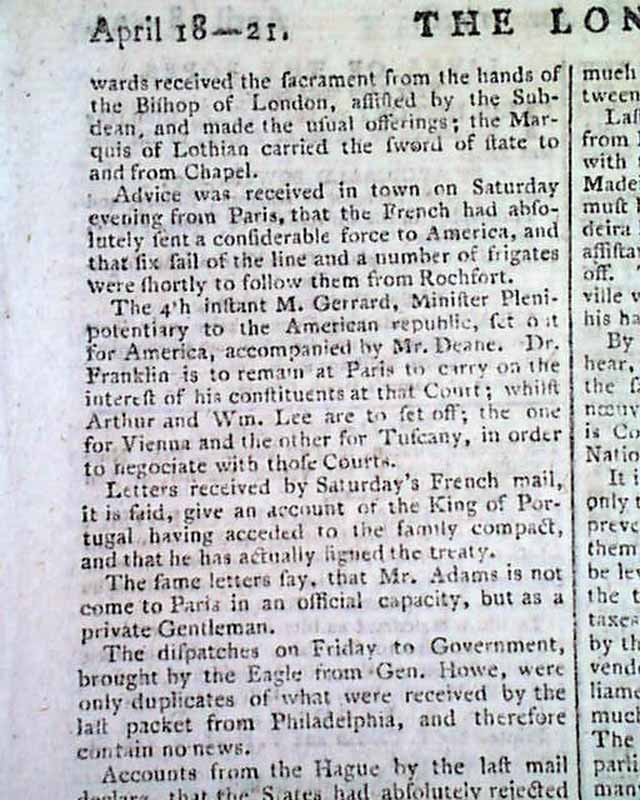 Franklin and Adams in France... Much more...

An inside page includes: "...from Paris that the French had absolutely sent a considerable force to America & that six sail of the line & a number of frigates were shortly to follow them..." and "...M. Gerrard, Minister Plenipotentiary to the American republic, set out for America accompanied by Mr. Deane. Dr. Franklin is to remain at Paris to carry on the interests of his constituents at that Court...same letter says that Mr. Adams is not come to Paris in an official capacity but as a private gentleman." and further on is: "The Congress have signified to the planters of the English islands in America that provided they preserve a perfect neutrality, they need be under no apprehensions of any hostile invasion of their property. If, however, they be determined to shew themselves professed advocates for the Mother Country, they are menaced with all the horrors of immediate destruction."
Another page includes: "...letters from Paris advise that Dr. Franklin is to continue at Paris sole Charge des Affairs for the United States of America...The following article is included in the treaty signed between the Thirteen United States of America and the French Court: ..." and what follows is that text. Also: "It is said that a body of Continental troops are preparing, by order of the Congress, for an expedition into Canada early this ensuing campaign under the command of the Marquis de la Fayette."
A short bit from Paris on the back page notes: "Mr. Adams, brother of the celebrated member of the American Congress, arrived at Dr. Franklin's house here two days ago with some advices from America, the contents of which are not yet publicly known."  and a bit further on is: "...The natural enemies of Great Britain, dreading her re-union with her revolted colonies, have openly espoused a cause...The Americans, when too late, will probably regret their having permitted the moment of conditional submission to pass without being improved; and their allies will repent their having ever espoused their cause."
Eight pages, 8 1/4 by 11 1/4 inches, very nice, clean condition.