Home > Back to Search Results > Reuniting with England? The situation at Charleston...
Click image to enlarge 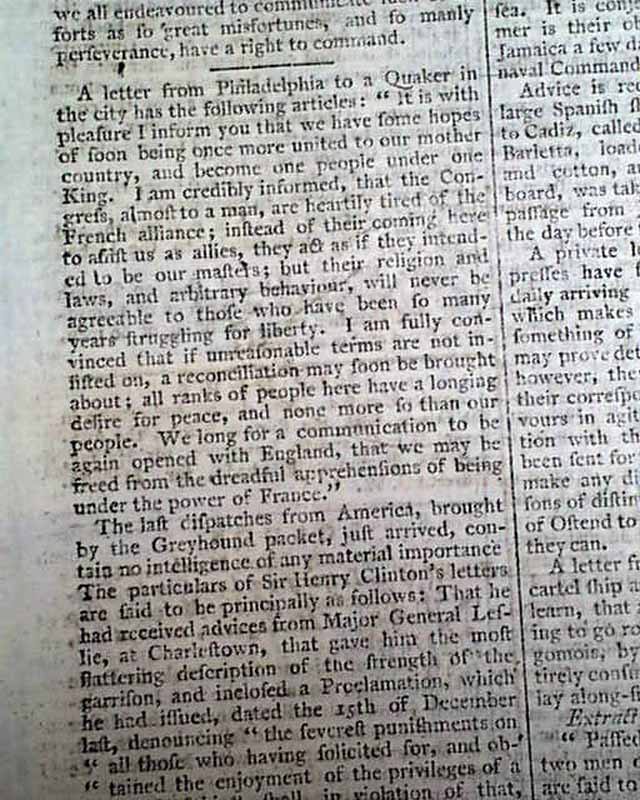 Reuniting with England? The situation at Charleston...

* Revolutionary War
* From The Enemy

Page 2 has an interesting, and erroneous, report to a Quaker in Phila. which includes: "....I inform you that we have some hopes of soon being once more united to our mother country & become one people under our King...that the Congress, almost to a man, are heartily tired of the French alliance...they act as if they intended to be our masters..." with more. Then some talk on the situation at Charleston, then: "...that Mr. Washington's next attempt is to be directed against New York, & with a view of collecting the largest force he can..." with more.
Page 7 has most of a column with news from: "America - From the South Carolina Gazette" with much on the situation around Charleston, one bit noting: "...a part of South Carolina Royalists, commanded by Major Fraser...surprised & took prisoners a patrol of Washington's cavalry, consisting of a Captain and eight men...". And the bkpg. mentions: "Mr. Adams the American agent...and Dr. Franklin at Paris, are the only ostensible persons commissioned  by Congress to treat for a peace with Great Britain...Mr. Laurens...request that he might be allowed to visit the American prisoners..." with more.
Eight pages, 8 1/2 by 11 1/2 inches, very nice condition.