Home > Back to Search Results > Mention of the Battle of Culloden...
Click image to enlarge 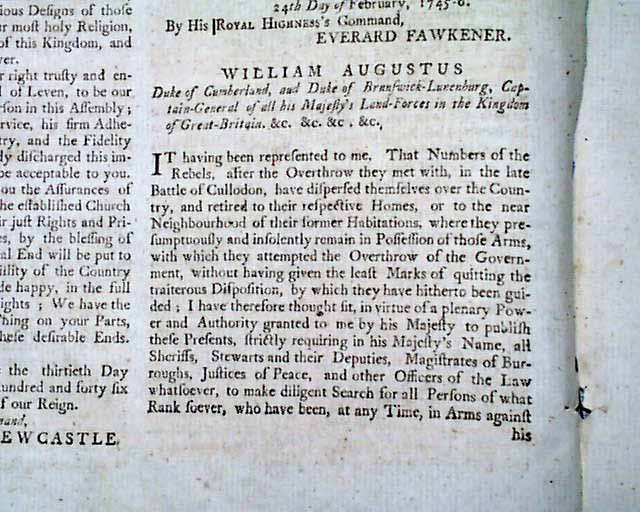 Mention of the Battle of Culloden...

This early Scottish newspaper has reporting on the Jacobite War, including a ftpg. item noting: "...hear that his Royal Highness the Duke was soon to march from Inverness...The rout was by Fot Augustus & Inverlochy; five other regiments are marching thro' Badenoch...". Inside has: "...numbers of the Rebels, after the overthrow they met with in the late Battle of Culloden, have dispersed themselves...they presumptuously & insolently remain in possession of those arms with which they attempted the overthrow of the government without having given the least marks of quitting the traitorous disposition..." & more. Another item notes: "...the happy deliverance of the nation by the glorious complete victory obtained by his Royal Highness the Duke of Cumberland over the Rebels, thereby freeing us from the intolerable calamities of an intestine war...".
Four pages, 8 by 10 inches, partial red tax stamp, minor stain & a bit of loss to an upper corner, good condition.