Home > Back to Search Results > Early and rare title... Pirates and the Plague...
Click image to enlarge 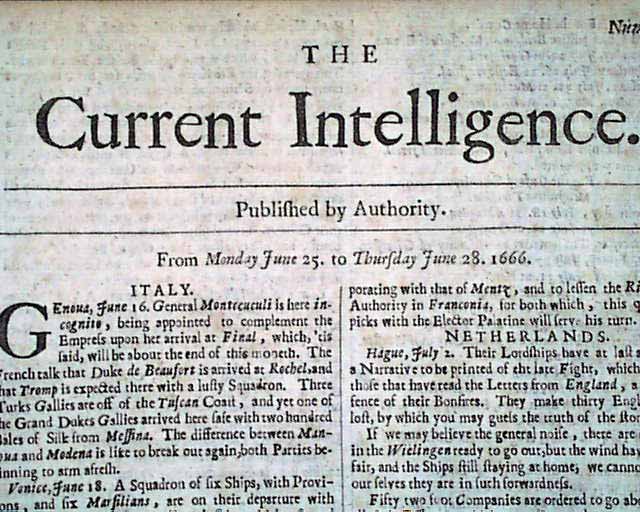 Early and rare title... Pirates and the Plague...


THE CURRENT INTELLIGENCE, London, June 28, 1666  This is a very rare title as it lasted for only for a matter of months, ending publication when the Great Fire of London struck in September of 1666.
The front page has a report from Rome noting in part: "...The Popes Gallies are in the mean time ordered to cruise about Naples, Genoa and Sardinia to clear the coasts of Pyrates...". The back page has a report from Norwich on the "Bill of Mortality" which includes: "...Buried in all 42, or the Plague 23." and also a similar account from London noting: "The account of the burials this week according to the several divisions is thus: In the 97 Parishes 29. Plague 2..." with further numbers on the Plague, etc. Nice to have a contemporary report on the death toll of the Plague.
A single sheet, 11 1/4 by 7 inches, very nice condition.