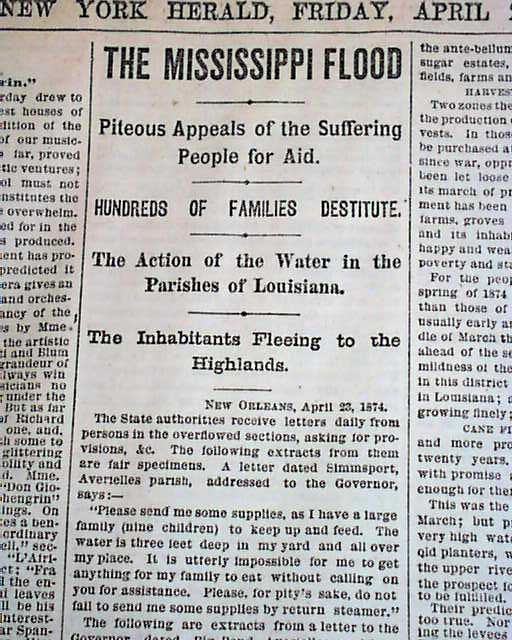 The top of page 7 has one column headings: "THE MISSISSIPPI FLOOD" "Piteous Appeals of the Suffering People for Aid" "Hundreds Of Families Destitute" and more. (see)
Other news of the day. Complete with 12 pages, nice condition.

wikipedia notes: Heavy spring rains caused the Mississippi River to overflow, breaching levees and flooding enormous swathes of the Lower Mississippi Valley. The flooding began in February and only began to recede on May 20th. According to the New Orleans Daily Picayune of May 3rd, thirty-one of Louisiana's fifty-three parishes (home to some 375,000 people) were entirely or partially underwater. The Picayune also reported that breaches at Hushpakana and Bolivar, Mississippi, had "transformed the Yazoo Valley into an inland lake."  Mayor Louis A. Wiltz of New Orleans published a circular on May 30th addressed to "the Mayors of thirty-four large American cities" seeking contributions of cash and provisions for relief efforts. In the circular, the Flood of 1874 was described as the highest on record. It also included the observations of former U.S. Surveyor General for Louisiana William J. McCulloh, who estimated that a total of 12,565,060 acres had been flooded across Louisiana (8,065,000), Mississippi (2,500,000), and Arkansas (2,000,000).