Home > Back to Search Results > Death of the King of Spain, Charles II...
Click image to enlarge 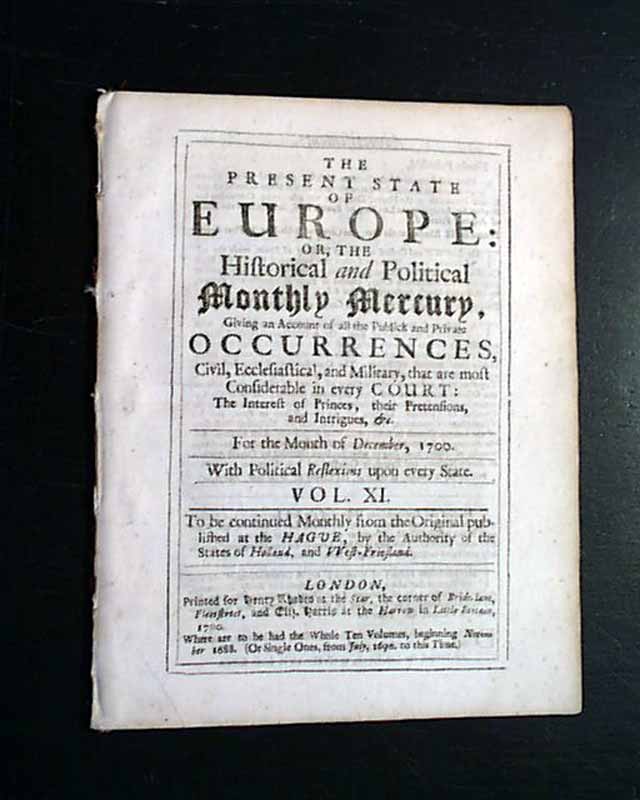 Death of the King of Spain, Charles II...

Item # 669988 THE PRESENT STATE OF EUROPE: OR THE HISTORICAL & POLITICAL MONTHLY MERCURY, London, December, 1700  A quite rare periodical title seldom offered with the content being just as the title suggests--news & political reports from all corners of Europe including England.
There are several reports on the death of the king of Spain, the item from France beginning: "The death of the King of Spain did not reach the Court of Versailles all of a sudden...It was brought by two or three different couriers..." and the item from England reading: "Some few days after the King and the whole Court went into mourning for the death of the King of Spain." and other reports. Headed: "Advice from Spain" is "An Extract of the Catholick King Charles the Second's Last Will and Testament" which takes over 6 pages.
Over 32 pages of text & included at the back is the index for the entire volume for 1700. Measures 6 1/2 by 8 1/4 inches and in excellent condition. Full title page.