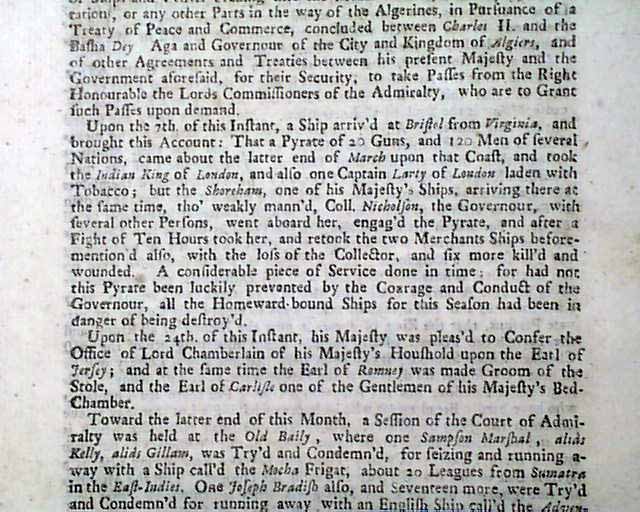 * From the turn of the 18th century
* Great pirates account reporting

Certainly the most notable content is the report of a pirate capturing a ship off the coast of Virginia, but the King's ship Shoreham came to the rescue--commanded by he Governor, Nicholson-- and after a 10 hour fight overtook the pirate. See the photos for the detailed report.
This is a documented event from the pirate era of America. The back story, as provided by virginiaplaces.org, fills in many of the details of this event:
"In 1700, the pirate Lewis Guittar captured a fast merchant vessel, the La Paix (Peace) in Barbados, converted it into his pirate flagship, then seized other ships to assemble a pirate fleet. That pirate fleet captured multiple vessels off the Virginia coastline, but Lewis Guittar's success ended after he sailed into Lynnhaven Bay in April, 1700.
He thought the only British warship in the Chesapeake Bay region was the dilapidated Essex Prize. Some of the merchant vessels that were anchored in Lynnhaven Bay tried to escape, fleeing to the Atlantic Ocean and hoping they could sail faster than the pirates, but one ship slipped up the James River to alert the colonial authorities. The powerful warship Shoreham had arrived recently to strengthen the colony's defenses, and it quickly sailed (with Governor Nicholson on board) to challenge the La Paix.
After a battle in Lynnhaven Bay, the sails and rudder of the La Paix were shot away and the pirate flagship disabled. Guittar threatened to blow it up, killing 50 or so prisoners that he had seized from other vessels, rather than surrender unconditionally. To save the lives of the hostages, Gov. Nicholson agreed to grant quarter to the pirates, assuring them of a trial in England. One pirate (John Houghling) jumped off the La Paix and swam to shore in hopes of escaping. After the first trial for piracy in Virginia, Houghling was found guilty and hung, together with two other pirates who had been found asleep on one of their prizes and were therefore excluded from the governor's clemency.
The presence of the 28-gun Shoreham had surprised Lewis Guittar, and reflected a change in colonial policy to increase protection of merchant vessels sailing between England and the Chesapeake Bay."