Home > Back to Search Results > The Gettysburg Address on front page...
Click image to enlarge 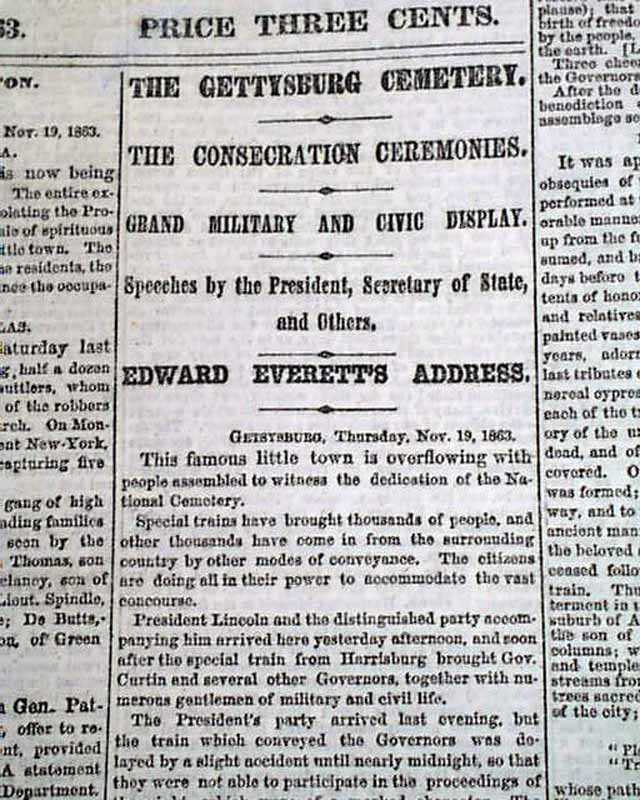 The Gettysburg Address on front page...


NEW YORK TRIBUNE, Nov. 20, 1863  It would be difficult to argue for a more notable or desirable newspaper from the Civil War. Combine the complete text of the historic Gettysburg Address by President Abraham Lincoln, with this famous newspaper published by Horace Greeley, a Lincoln supporter, with the content being on the front page, and the combination makes for one of the best newspapers one could own from the Civil War era.
The top of the front page has column heads: "The Gettysburg Cemetery" "The Consecration Ceremonies" "Grant Military and Civic Display" "Speeches by the President, Secretary of State, and Others" "Edward Everett's Address".
The article begins with a Gettysburg dateline: "This famous little town is overflowing with people assembled to witness the dedication of the National Cemetery..." and the arrival of the President: "...The President's party arrived last evening...After supper the President was serenaded by the excellent band of the 5th New York Artillery...Mr. Lincoln at length presented himself, when he was loudly cheered. He said..." and what follows is his little speech to the crowd, then: "...the President retired amid loud cheers...".
Following this are the details of the ceremonies of the dedication, presented in more detail here than typically found in other newspapers. Then: "The President then delivered the following dedicatory speech: Four score and seven years ago our fathers brought forth upon this continent a new Nation..." and the remainder of the immortal Gettysburg Address.
Lincoln's speech was not the focus of the day as Edward Everett was the primary speaker, but it would be the President's 2 minute, 272 word address that would go down in history as perhaps the most memorable speech of any President.
Following this is: "Mr. Everett's Address" which begins on the front page and continues to take the entirety of page 2.
Not all newspapers of that time printed Lincoln's speech, and those that did rarely printed the text on the front page.
Complete in 8 pages, an unrelated article clipped from the second leaf has been discretely replaced with period "filler" paper to fill the void, otherwise in great condition.
Another dealer had this edition offered at $15,000. A newspaper for the best of collections.