Home > Back to Search Results > Rare prints of the Astor Place Riot...
Click image to enlarge 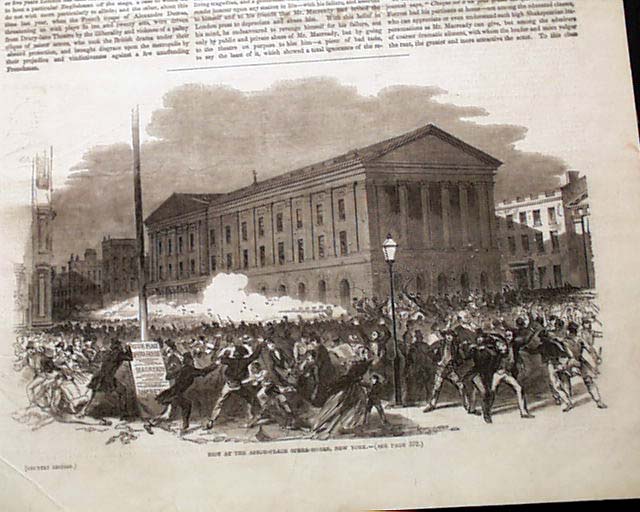 
THE ILLUSTRATED LONDON NEWS, England, May 12, 1849  Amongst the many interesting prints the most notable would be the front page print: "Riot at the Astor Place Opera House, New York" with 3 more related prints inside. There is much text on the riot as well.
As Wikipedia notes: "The Astor Place Riot occurred on May 10, 1849, at the now-demolished Astor Opera House and left between 22 and 31 rioters dead and more than 120 people injured. It was the deadliest to that date of a number of civic disturbances in Manhattan, which generally pitted immigrants and nativists against each other, or together against the wealthy who controlled the city's police and the state militia.
The riot resulted in the largest number of civilian casualties due to military action in the U.S. since the Revolutionary War."
Note also that the Wikipedia print of the riot is the same print on the front page of this issue.
Rare to find prints of the Astor Place Riot as the event preceded any illustrated American newspapers.
Sixteen pages, very nice condition.