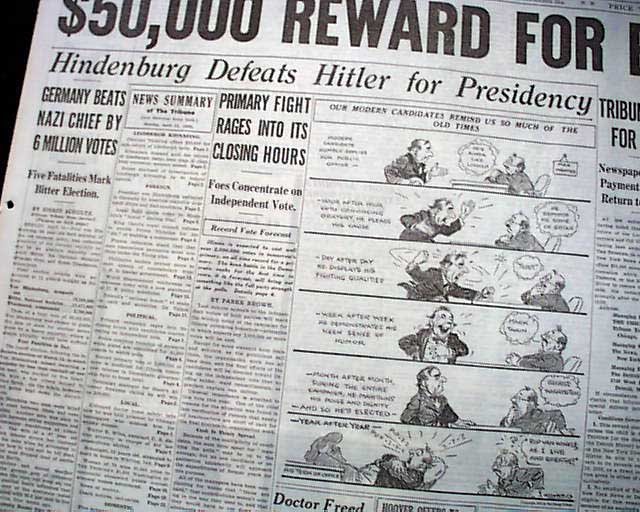 The front page has a six column headiong: "Hindenburg Defeats Hitler for Presidency" with subheads. A few related photos are on the back page. First report coverage on the German election of President Paul Von Hindenburg over Adolph Hitler. Hitler's rise to power would be right around the corner. Also nice reporting on the Lindbergh bay kidnapping case with a nice banner healdine and a few photos. Always nice to have notable events in history reported in this World famous publication.
Other news, sports and advertisements of the day. Complete in 34 pages, this is the rare rag edition that was produced on very high quality newsprint, with a high percentage of cotton & linen content, allowing the issues to remain very white & sturdy into the present. Given the subscription cost, libraries & institutions rather than individuals were the primary subscribers of these high-quality editions. Nice condition. A few small binding holes along the spine.

wikipedia notes: The presidential election (Reichspräsidentenwahl) of 1932 was the second and final direct election to the office of President of the Reich (Reichspräsident), Germany's head of state during the 1919-1934 Weimar Republic. The incumbent President, Paul von Hindenburg, had been elected in 1925 but his seven year term expired in May. After two rounds of voting, on the 13 March and the 10 April, Hindenburg was re-elected to a second term of office. His major opponent in the election was Adolf Hitler of the Nazi Party (NSDAP).

Under the Weimar system, the presidency was a powerful office and, following his re-election, Hindenburg played an important role in the coming to power of the Nazis, reluctantly appointing Hitler as Chancellor of Germany in January 1933.