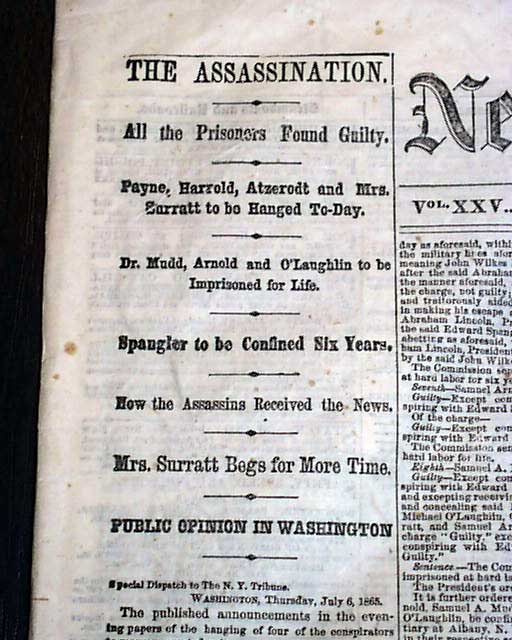 A significant issue on the assassination trial of Abraham Lincoln, as the first column has the historic report:" THE ASSASSINATION" "All the Prisoners Found Guilty" "Payne, Harrold, Atzerodt and Mrs. Surratt to be Hanged To-Day" "Dr. Mudd, Arnold and O'Laughlin to be Imprisoned for Life" "How the Assassins Received the News" "Mrs. Surratt Begs for More Time" with a bit more, with the text on these reports taking about a full column.
The balance of the ftpg. is taken up with other reports concerning the end of the Civil War, with  "From Texas--Galveston Occupied by Colored Troops--Dreariness & Desolation of the City..." "The Slaves Declared Free--The Acts of the Governor & Legislature Void..." "From New Orleans" and more.
Eight pages, never bound nor trimmed (as sold on the streets), very nice condition.