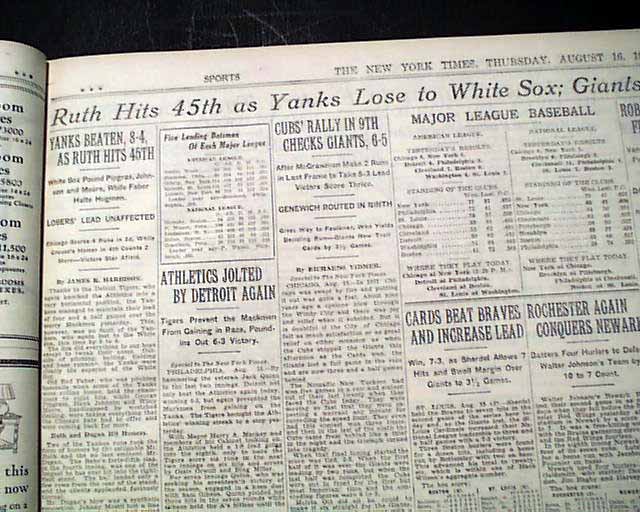 The sport's section (page 15) has a five column headline: "Ruth Hits 45th as Yanks Lose to White Sox" with subheads and box scores. (see) Text includes: "Bill Dickey, the catcher from Little Rock, has something to write home about last night. The tall lad made his debut as a Yankee..."
Other news, sports and advertisements of the day. Complete in 44 pages, this is the rare rag edition that was produced on very high quality newsprint, with a high percentage of cotton & linen content, allowing the issues to remain very white & sturdy into the present. Given the subscription cost, libraries & institutions rather than individuals were the primary subscribers of these high-quality editions. Some spine residue from disbinding, otherwise nice.

wikipedia notes: William Malcolm Dickey was an American professional baseball catcher and manager. He played in Major League Baseball for the New York Yankees for 19 seasons. Dickey managed the Yankees after retiring from his playing career.
Dickey played for the Yankees from 1928 through 1943. After serving in the United States Navy during World War II, Dickey returned to the Yankees in 1946 as a player and manager. He retired after the 1946 season, but returned in 1949 as a coach, where he taught Yogi Berra the art of catching.
During Dickey's playing career, the Yankees went to the World Series nine times, winning eight championships. He was named to 11 All-Star Games. As a manager and coach, the Yankees won another six World Series titles. Dickey was elected to the Baseball Hall of Fame in 1954.