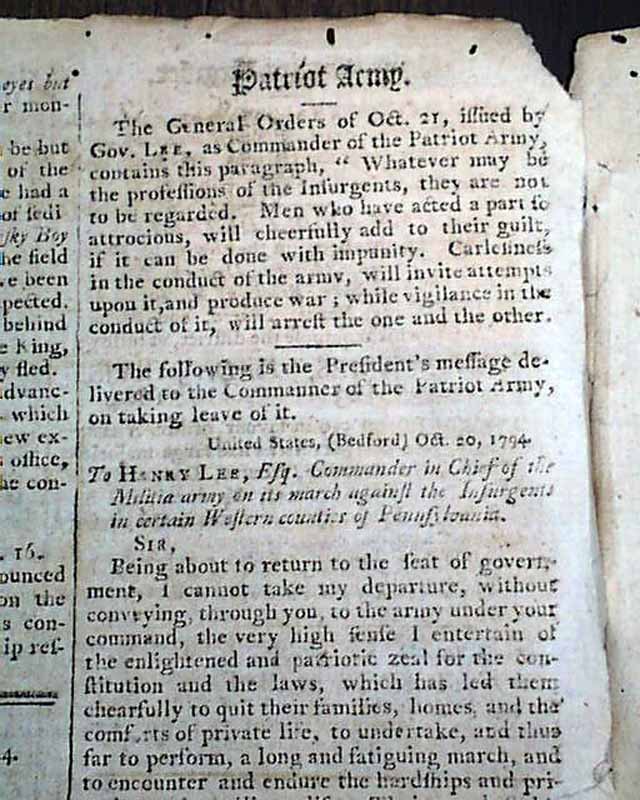 This issue has content relating to the Whiskey Rebellion in Western Pennsylvania.
A great issue as page 2 has much on the Rebellion, including an article headed "Patriot Army" with the latest reports, one beginning: "This day the President of the United States arrived here...The resistance to the Federal Government seems, for the present, at an end. The insurgents have been subdued rather by terror than by violence..." with much more.
Another column is also headed "Patriot Army" and it includes a very notable letter signed in type by the President: G. Washington: "To Henry Lee, Commander in Chief of the Militia army on the March against the Insurgents in certain Western counties of Pennsylvania".
This conflict was of such significance that Washington actually traveled to Bedford in Western Pa. to assess the army's progress. Confident that all ws going well Washington left General Henry Lee in charge of the army.
In his letter to Lee he noted his two expectations: "...First—to combat, and subdue all who may be found in arms in opposition to the National Will & authority. Secondly—to aid & support the Civil Magistrate in bringing offenders to justice. The dispensation of this justice belongs to the Civil Magistrate—and let it ever be our pride, and our glory, to leave the sacred deposit there, unviolated.”
Four pages, some minor loss at the spine margin affects no text, generally good condition. Another dealer offers this issue for $1,500.