Home > Back to Search Results > Nelson's letter detailing his victory at the Battle of the Nile...
Click image to enlarge 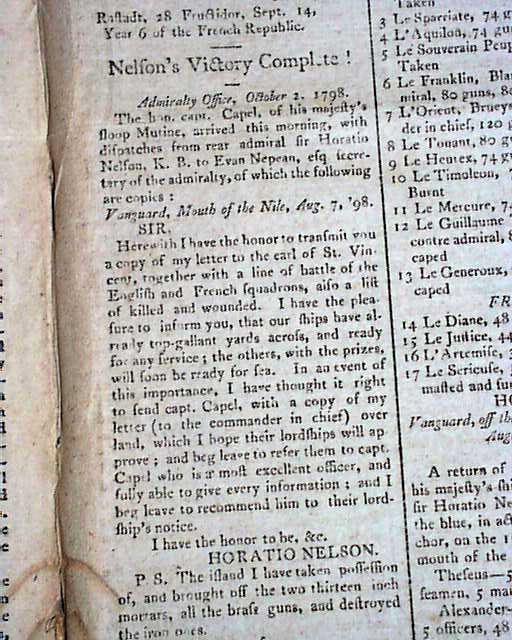 Nelson's letter detailing his victory at the Battle of the Nile...

Page 3 has much detail on Horatio Nelson's defeat of Napoleon Bonaparte at the Battle of the Nile. Headed: "Nelson's Victory Complete!" the lengthy reporting includes a letter from him, datelined: "Vanguard, Mouth of the Nile, Aug. 7, '98" and another letter from him dated Aug. 3, the latter beginning: "Almighty God has blessed his majesty's arms in the late battle by a great victory over the fleet of the enemy who I attacked at sun set...off the mouth of the Nile..." followed by various details of the battle. Both letters are signed in type: Horatio Nelson.
Following this are lengthy lists of the captures, partially shown in the photos. A fine account of this notable battle from the Napoleonic War.
Four pages, handsome masthead, nice condition.