Home > Back to Search Results > William Cobbett's famous newspaper... An Act and letter from John Adams...
Click image to enlarge 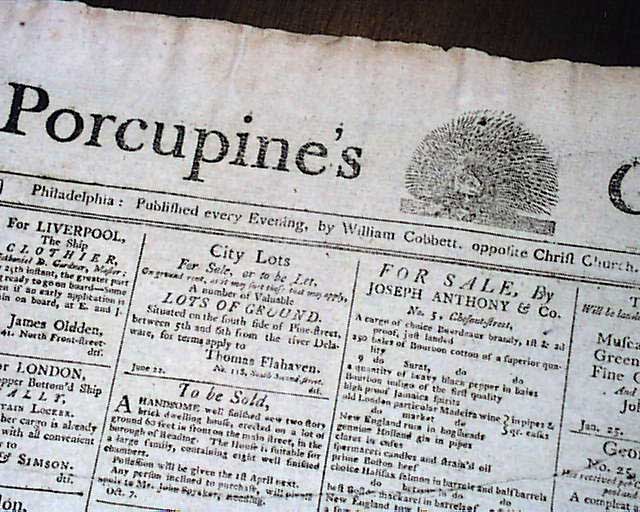 
PORCUPINE'S GAZETTE, Philadelphia, July 11, 1798  This was William Cobbett's important and controversial--but short-lived--daily newspaper.
Cobbett was a prolific & controversial publisher who often wrote under the pen-name of "Peter Porcupine." He was famous for sniping at his political opponents, usually those of a Jeffersonian-Republican sentiment.
Page 2 has a very unusual engraving concerning a book: "The Cannibals' Progress; of the Dreadful Horrors of the French Invasion".
Page 2 also has: "An Act" of Congress concerning a treaty with France, signed in type by the President; John Adams. Then an: "Address of the Cincinnati of New Jersey to John Adams" with his response to them, signed: John Adams.
Four pages, never-trimmed margins, nice condition.