Home > Back to Search Results > Great account on Admiral Byng and his execution...
Click image to enlarge 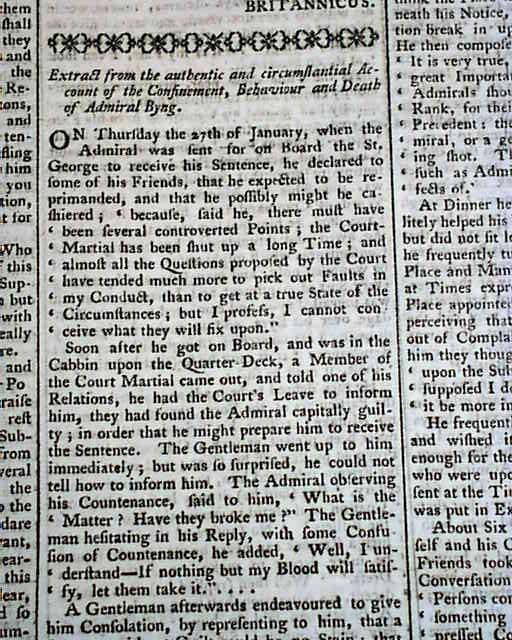 Inside has nearly 2 pages consumed by a very detailed account headed: "Extract from the Authentic & Circumstantial Account of the Confinement, Behaviour and Death of Admiral Byng".
A few bits include: "...When he had drank...he added, 'I am to die tomorrow and as my country requires my blood, I am ready to resign it, though I do not as yet know what my crime is...". Also much detail on his final moments before being executed.
Admiral John Byng was a Royal Navy officer who was notoriously court-martialed and executed by firing squad for failing to relieve a besieged British garrison during the Battle of Minorca. He was found guilty of failing to "do his utmost" to prevent Minorca falling to the French. He was sentenced to death and, after pleas for clemency were denied, was shot dead by a firing squad on March 14.
Eight pages, 8 1/4 by 11 1/4 inches, red tax stamp, very nice condition.