Home > Back to Search Results > Very first Act of Congress... An ad for the "President's household"...
Click image to enlarge 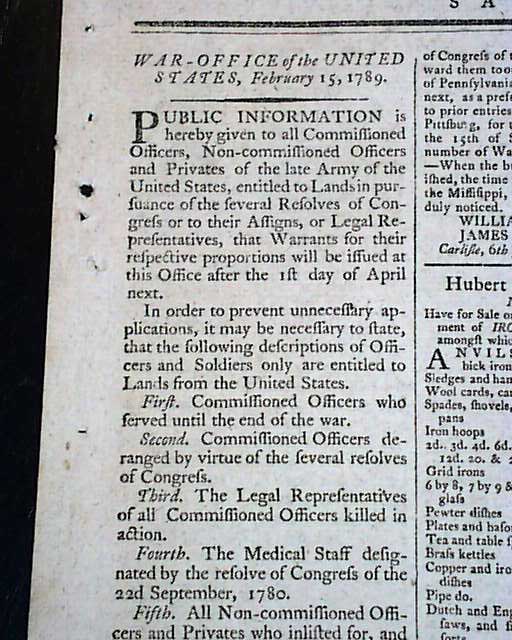 Very first Act of Congress... An ad for the "President's household"...

The front page has an advertisement headed: "The President's Household" reading: "Whereas all servants and others, employed to procure provisions or supplies for the Household of the PRESIDENT of the United States, will be furnished with monies for those purposes. Notice is therefore given that no accounts for the payment of which the public might be considered as responsible, are to be opened with any of them. Samuel Fraunces, Steward of the Household."
Samuel Fraunces was the owner of the famed Fraunces Tavern in New York City, where George Washington said farewell to his officers at the end of the Revolutionary War.
Perhaps the most significant item is on page 2 - it being the very first Act passed by the newly-formed federal government, thus being a milestone in the establishment of the federal republic.
This issue, along with the noted Gazette of the United States, is almost certainly the first newspaper printing of this Act, as the nation's capital was in New York City at the time.
The Act is titled: "An ACT to Regulate the Time and Manner of Administering certain Oaths" which is signed in type by the President: George Washington and the Vice President: John Adams.
Four pages, never-trimmed margins, small binding holes at the blank spine margin, very nice condition.