Home > Back to Search Results > Mention of "New Spain", the New World" and "America"...
Click image to enlarge 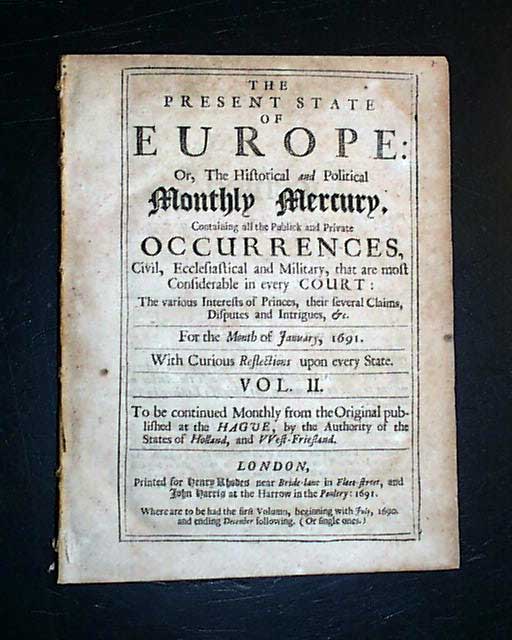 Item # 668728 THE PRESENT STATE OF EUROPE OR THE HISTORICAL & POLITICAL MONTHLY MERCURY, London, England, January, 1691  This is a very uncommon periodical published during the reign of King William III, formatted something like a pamphlet but definitely a periodical.
Much of this issue is concerned with the political & military affairs of Europe & is organized into news by country or region with commentary on the events.
A great report under: "Advice from Spain" begins: "The fleet is arrived from New Spain, and they assure us that since the discovery of the New World, there never arrived a fleet so richly laden as this...that several new mines of gold are lately discovered, from whence they hope for vast emolument...".
Further on under: "Advice from England is: "...The same success attends the affairs of the English in America, where they get the better of the French every day & make themselves masters of their best Plantations. They have taken within this little while the island of Orleans, and the city of Quebeck..." with more.
A nice feature of this periodical is the full title page which includes the date.
Complete in 38 pages, 5 3/4 by 7 1/2 inches, 38 pages, very nice condition.