Home > Back to Search Results > Great issue on the sinking of the Titanic...
Click image to enlarge 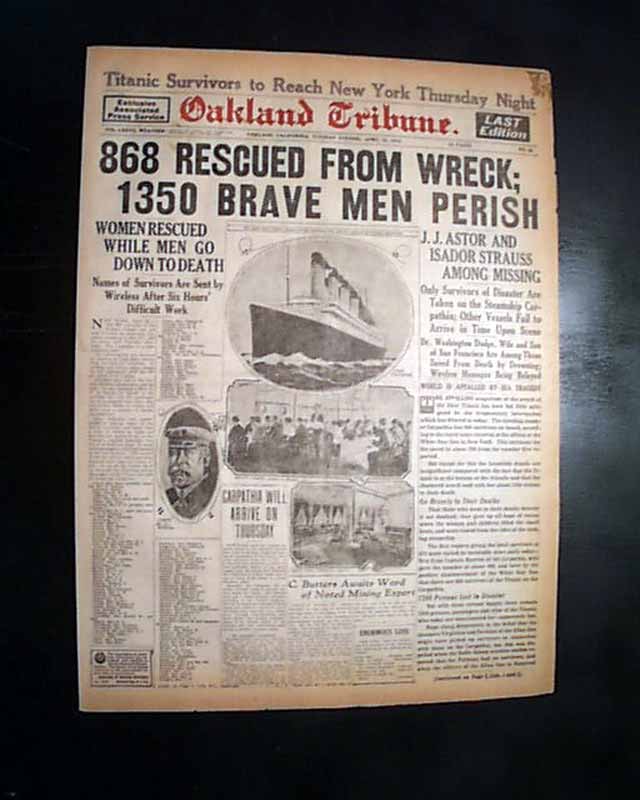 One of the better issues on the Titanic tragedy we have offered in some time, as the banner headline announces: "868 RESCUED FROM WRECK; 1350 BRAVE MEN PERISH". There are four related front page photos including one of the Titanic and one of Capt. E. J. Smith. Plus various subheads on the tragedy include: "J.J. Astor And Isador Strauss Among Missing" "Women Rescued While Men Go Down To Death" "Names of Survivors Are Sent by Wireless After Six Hours' Difficult Work" "Only Survivors of Disaster Are Taken on the Steamship Carpathia; Other Vessels Fail to Arrive in Time Upon Scene..." and even more.
And the great coverage continues on pages 2, 3 and 8 with banner headlines and extensive reporting on each of those pages.
Present are pages 1-10 of a 22 page issue likely being section one of two. Archivally rejoined at the spine, some minor tears at the blank margins and the slightest bit of margin chipping, generally in very nice clean condition, more so than what is typically found of newspapers of this period.