Home > Back to Search Results > Two items by Ben Franklin, and much more...
Click image to enlarge 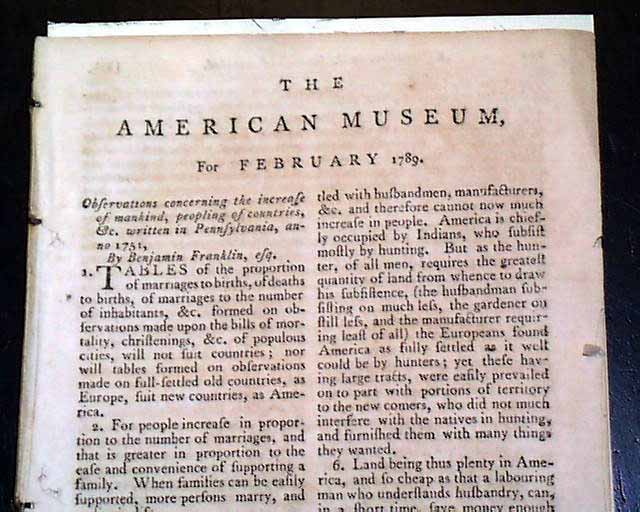 Two items by Ben Franklin, and much more...

Item # 668682 THE AMERICAN MUSEUM, (Philadelphia), February, 1789
The first 3 1/2 pages are taken up with an article written by Benjamin Franklin in 1751, titled: "Observations Concerning the Increase of Mankind, Peopling of Countries, etc." and further on is another: "Letter from Benjamin Franklin..." which is signed by him in type: B. Franklin.
Another article: "Considerations on the Future Place of Residence of Congress" takes about 3 pages. And also: "Remarks on the Amendments to the Federal Constitution..."; a printing of the July 5, 1775 draft of the Olive Branch Petition signed in type by: John Hancock and many others.
There is also a lengthy: "Account of the Battle of Bunker's Hill" followed by a detailed: "General Gage's Account of the Battle of Bunker's Hill..." dated at Boston, June 25, 1775, signed in type: Tho. Gage.
Complete in 104 pages, 4 3/4 by 8 inches, disbound without a full title page, very nice condition. Included is a photocopy of that volume verifying Philadelphia as the city where printed.