Home > Back to Search Results > General Oglethorpe and Georgia...
Click image to enlarge 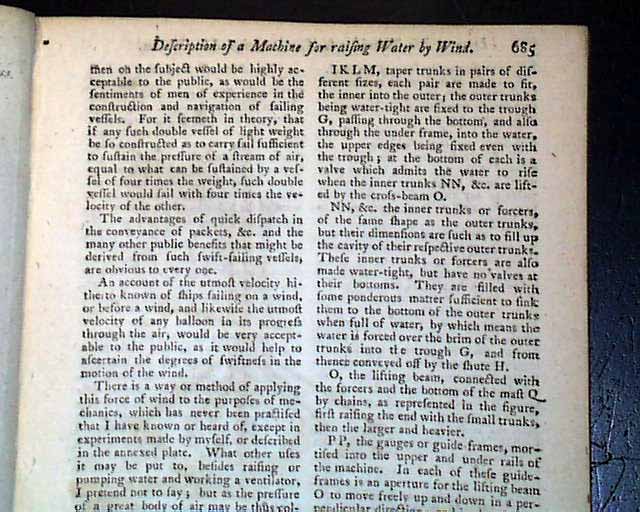 
GENTLEMAN'S MAGAZINE, London, September, 1785  Included is an interesting article: "Description of a Machine for Raising Water by Wind" being an unusual type of windmill which includes a nice full page plate of it.
Other items include: "Chemical Inquiries into the Effects of Spirituous Liquors"; an article concerning General Oglethorpe and his settling of Georgia, and much more.
Near the back is: "American News" with various reports including mention of John Rutledge being named ambassador to the Netherlands, and that no more indented servants are to be imported from England or Ireland: "...as many of those already arrived are in a starving condition."
Also mention that: "...A treaty is on foot with the Western Indians...as they have lately committed some cruel depredations.", and other items.
Present are both plates called for.
Complete in 84 pages, 5 1/4 by 8 1/4 inches, full title/contents page featuring an engraving of St. John's Gate, very nice condition.