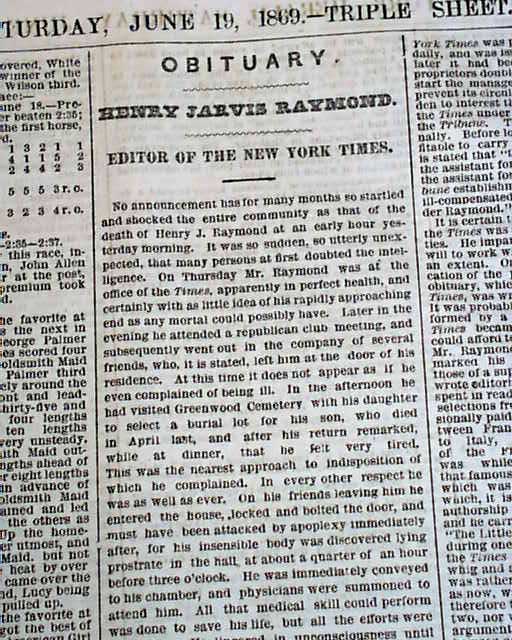 Page 3 has an article headed: "Obituary" "Henry Jarvis Raymond" "Editor Of The New York Times" (see) Text takes up over 2 full columns.
Other news of the day. Complete with all 12 pages, nice condition.

wikipedia notes: Allen lost to what many consider his most skilled opponent, Mike McCoole in an early career battle on 15 July 1869 at Foster's Island near St. Louis, for the heavyweight championship of America in a ninth round foul. Allen appeared to be nearly the equal of McCoole, the better known boxer, but lost the battle when the foul occurred. In the ninth round, McCoole and Allen clinched and fell rolling around the ring, when it appeared to the judges present that Allen gouged McCoole's eyes, a clear violation of the Broughton Rules. In the opinion of the New York Daily Herald, "Allen outfought McCoole all the way through and to all appearance would have won the fight if he had been allowed to proceed". Allen would face McCoole again with better results. A large fight broke out after the bout that included the use of clubs.