Home > Back to Search Results > Great column heads on the Battle of Bull Run...
Click image to enlarge 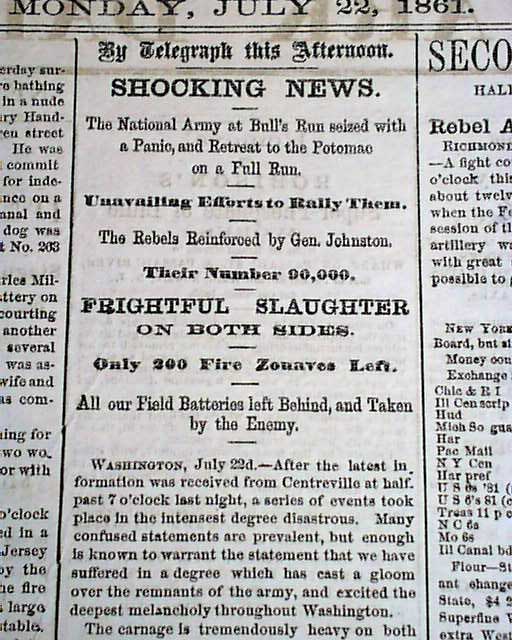 Great column heads on the Battle of Bull Run...

The top of page 2 has great column headlines on the historic Battle of Bull Run: "SHOCKING NEWS" "The National Army at Bull's Run Seized with a Panic, & Retreat to the Potomac On A Full Run" "Unavailing Efforts to Rally Them" "The Rebels Reinforced by Gen.Johnston" "Their Number 90,000" "FRIGHTFUL SLAUGHTER ON BOTH SIDES" "Only 200 Fire Zouaves Left" "All Our Field Batteries Left Behind & Taken by the Enemy".
Page 2 also has a nice editorial on the batle along with additional reports.
This is an uncommonly frank report of the battle as most Northern newspapers reported a more optimistic outcome of the battle.
Four pages, date noted at the top of pages 2 & 3, nice condition.