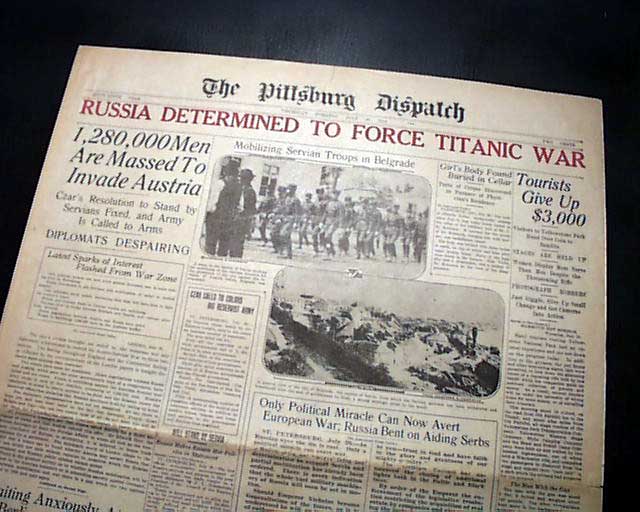 The front page has a banner headline in red lettering: "RUSSIA DETERMINED TO FORCE TITANIC WAR" with various subheads and two related photos. Coverage of the official beginning of World War I.
Complete with all 14 pages, minor wear along the central fold, generally nice.

source: wikipedia: The Austro-Hungarian government used the assassination of Archduke Franz Ferdinand as a pretext to deal with the Serbian question, supported by Germany. On 23 July 1914, an ultimatum was sent to Serbia with ten demands, some so extreme that the Serbian reply included reservations and rejected the sixth demand. The Serbians, relying on support from Russia, removed acceptance of the sixth key demand (the draft reply had accepted it), and also ordered mobilization. In response to this, Austria-Hungary issued a declaration of war on 28 July. Initially, Russia ordered partial mobilization, directed at the Austrian frontier. On 31 July, after the Russian General Staff informed the Czar that partial mobilization was logistically impossible, a full mobilization was ordered. The Schlieffen Plan, which relied on a quick strike against France, could not afford to allow the Russians to mobilize without launching an attack. Thus, the Germans declared war against Russia on 1 August and on France two days later. Germany then violated Belgium's neutrality by the German advance through it to Paris, and this brought the British Empire into the war. With this, five of the six European powers were now involved in the largest continental European conflict since the Napoleonic Wars.