Home > Back to Search Results > The President addresses the discovery of gold in California...
Click image to enlarge 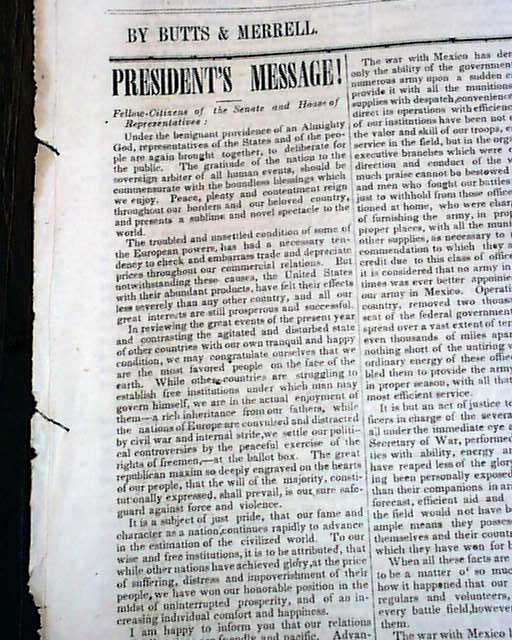 The President addresses the discovery of gold in California...

All of the front page & most of page 2 are taken up with the "PRESIDENT'S MESSAGE!" being the annual state-of-the-union address, signed in type: James K. Polk.
Within his message, and on the front page, he devotes much space to California and the discovery of gold, including: "...vast mineral wealth recently developed..." in Upper California, noting that: "...It was known that mines of the previous metals existed to a considerable extend in California at the time of its acquisition. Recent discoveries render it probable that these mines are more extensive & valuable than was anticipated..." with more.
Additionally the back page has: "There is no longer any doubt of the abundance of gold in California. Labor there is ahead of capital & commands its own price...The total addition of gold to the resources of the Californias is at a low calculation of $64,000 per day. Even the United States soldiers desert in platoons to dig for gold."
Some historians credit this Address by Polk in doing much to drive the Gold Rush fever, being a formal & governmental confirmation that large quantities of gold had been discovered in California. This lure for gold unleashed the largest migration in U.S. history. California would take the fast-track to statehood, becoming the 31st state in the Union in less than two years after this Address.
Four pages, nice condition.