Home > Back to Search Results > The Edmund Randolph scandal that would cause his resignation...
Click image to enlarge 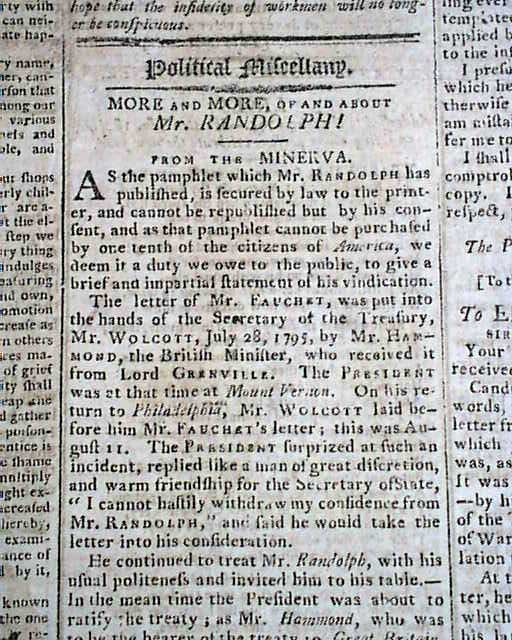 The Edmund Randolph scandal that would cause his resignation...


COLUMBIAN CENTINEL, Boston, Jan. 9 1796  The front page has several crucial letters on the scandal involving Sec. of State Edmund Randolph which would result in his resignation.
Randolph had been tasked with keeping friendly relations with France. The British Navy had intercepted correspondence from the French minister, Joseph Fauchet, to his superiors and turned it over to Washington. Washington was dismayed that the letters reflected contempt for the United States and that Randolph was primarily responsible.
The letters implied that Randolph had exposed the inner debates in the cabinet to the French and told them that the administration was hostile to France.
Washington immediately overruled Randolph's negative advice regarding the Jay Treaty. A few days later Washington, in the presence of the entire cabinet, handed the minister's letter to Randolph and demanded he explain it. Randolph was speechless and immediately resigned.
After his resignation, Randolph was held personally responsible for the loss of a large sum of money during his administration of the state department. He was eventually adjudged to owe the government more than $49,000, which he paid.
Nearly half of the front page & part of page 2 are taken up with the key letters regarding this scandal, including Randolph's letter of Aug. 19, and Washington's letter to Randolph of Aug. 20, 1795. The article is headed: "More And More Of and About Mr. Randolph!". Included also is "Mr. Fauchet's Certificate" which carries over to page 2.
Four pages, loss to a corner of the back leaf affects  pg. 3 ad, otherwise good condition.