Home > Back to Search Results > Laying the cornerstone of the Boston State House...
Click image to enlarge 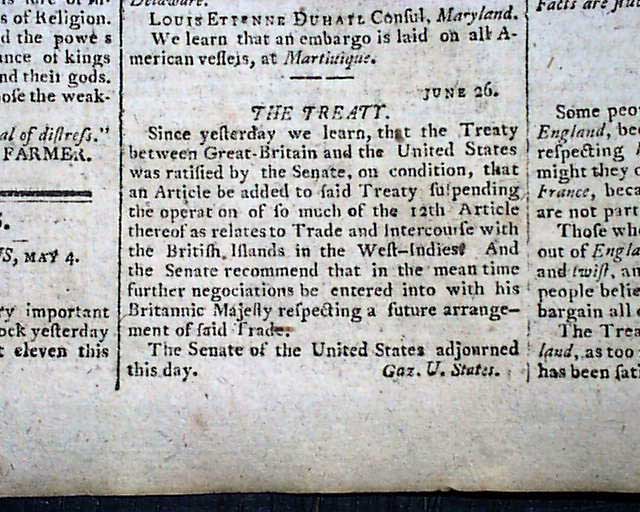 Laying the cornerstone of the Boston State House...

Page 2 contains a nice editorial headed: "The Treaty" referring to the controversial Jay Treaty, which had recently been approved by the Senate. It begins: "The ratification of the Treaty of Amity, Commerce, and Navigation between the United States and his Britannic Majesty...must be a source of pleasing sensations...to all sincere lovers of their country. The seeds of dissension which had been so plentifully sown are now removed & instead of irritations, feuds and divisions, there appears a prospect of harmony..." with much more. Also another item headed: "On The Treaty--Authentic" which offers further details.
Page 3 has, under "The Day", details regarding the laying of the cornerstone of the State House in Boston, beginning: "The XXth anniversary of the Independence of the United States of America will this day be celebrated..." with more on the planned celebrations, but it also includes a noteworthy report: "...To add to the splendor of the memorable day, a  new scene will be presented--that of laying the Corner Stone of the new State House..." with further on those details. Nice to have this report in a Boston newspaper.
Four pages, minor loss at a lower, blank corner, nice condition.